Rasa - Al-Shabab militants have killed at least 10 people, including soldiers and civilians, in a key Somali town close to the capital Mogadishu after ramming a bomb-laden vehicle into a police station. 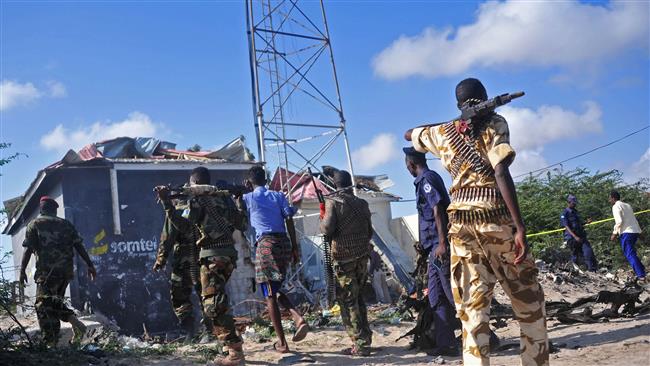 RNA - "We don't have the exact number of casualties so far but we have seen the dead bodies of more than 10 people, including civilians, who were killed in the attack," Abdukadir Ahmed, a local police official, told AFP by phone, adding that the attackers also suffered casualties.

Ahmed said fierce battles between Somali troops and militants were taking place in the town, adding, "There is heavy fighting going on at several bases in Afgoye district and one of the bases was attacked with a car loaded with explosives."

The al-Shabab militant group has claimed responsibility for the latest deadly attack, which sent shock waves across the region.

Sheikh Abdiasis Abu Musab, al-Shabab's military operations spokesman, said the militant group has now imposed full control over the town, adding, “Now most of the town is under our control.”

Al-Shabab also said in a statement that militants have “secured control of Afgoye town after heavy fighting and they put up the flag over the enemy bases.”

The terrorist group had evacuated the key town in May 2012 after coming under attack from the Somali army and the African Union peacekeepers.

Al-Qaeda-linked al-Shabab, which has been carrying out a series of deadly bombings throughout Somalia, is fighting to topple the government in Mogadishu.

Somalia has been the scene of fighting between al-Shabab and government forces since 2006. In 2011, al-Shabab was driven out of Mogadishu and other major cities.

However, the terrorist group continues to hit Mogadishu despite setbacks.

Tags: Al-Shabab Al-Qaeeda Somalia
Short Link rasanews.ir/201mPF
Share
0
Please type in your comments in English.
The comments that contain insults or libel to individuals, ethnicities, or contradictions with the laws of the country and religious teachings will not be disclosed