Iraq’s prime minister, whose country is engaged in a costly war with the Takfiri Daesh terrorist group, has implied that a number of Arab governments in the Persian Gulf region have been aiding and abetting the terror outfit. 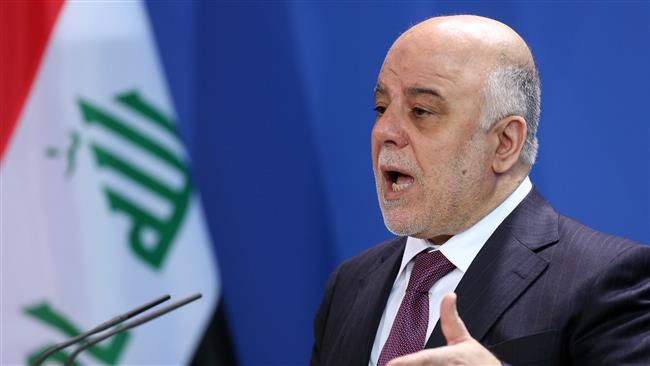 RNA - Speaking to ambassadors from neighboring and other foreign countries, Haider al-Abadi said bluntly that the Persian Gulf Arab littoral states are the “favorite” countries of the Daesh terrorists. He singled out Saudi Arabia among such states by naming it.

While support by such Arab governments for extremist groups has long been known to the countries in the region as well as Western intelligence agencies, the Monday remarks by Abadi, the prime minister of an Arab country, mark a first of their kind.

He also warned the Arab governments against negligence toward the threat posed by Daesh.

The Iraqi prime minister said Daesh had not emerged overnight, and that it had received support — in the form of money and weapons — by certain countries.

He implied that it was the same support that helped the group take over the northern city of Mosul in Iraq, which has been the subject of large-scale liberation operations since Monday.

Mosul fell to Daesh in 2014, the year when it started its campaign of brutalization inside Iraqi territory.

Saudi Arabia is accused of having nurtured Daesh with material and ideological support, with the group’s hallmark line of thought, namely Wahhabism, being Saudi Arabia’s official ideology. Wahhabism is a strand of radical ideology known for its intolerance and incongruence with established religions.

Tags: DAESH Iraq
Short Link rasanews.ir/201mP8
Share
0
Please type in your comments in English.
The comments that contain insults or libel to individuals, ethnicities, or contradictions with the laws of the country and religious teachings will not be disclosed