Rasa - A number of American activists gathered in front of the White House on Monday to express sympathy with victims of a recent deadly Saudi attack on a funeral ceremony in Yemen. 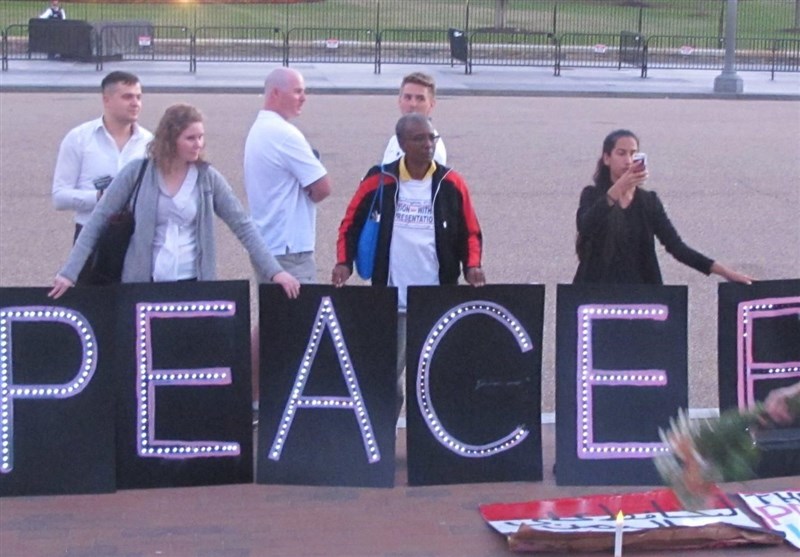 RNA - According to Tasnim dispatches, the activists from CODE PINK, a peace and social justice movement working to end US-funded wars, condemned the killing of civilians by Saudi Arabia in Sana’a, and expressed solidarity with the Yemeni people.

Earlier this month, warplanes of the Saudi-led coalition targeted a crowded funeral ceremony in Sana’a and killed at least 100 people.

At least nine airstrikes were conducted by Saudi jets on Khamis street in southern Sana’a. The building where the event was underway was seriously damaged and over 600 people were injured in the attacks.

The activists also called on American lawmakers to stop spending their tax dollars on supporting the Saudi kingdom. One of the protesters said, “As an American, I am ashamed that Yemeni children and women are being slaughtered with my tax money and American weapons.”

Arms sales by Western governments to Saudi Arabia have come under scrutiny by several rights groups due to Riyadh’s bombing campaign in Yemen.

The administration of US President Barack Obama has offered Saudi Arabia $115 billion in arms sales, a recent report said.

The offer, including weapons, other military equipment and training, is the highest the United States has offered in its 71-year alliance with the monarchy.

Tags: US Yemen Saudi
Short Link rasanews.ir/201mP6
Share
0
Please type in your comments in English.
The comments that contain insults or libel to individuals, ethnicities, or contradictions with the laws of the country and religious teachings will not be disclosed