Rasa - ISIL terror group ringleader Abu Bakr al-Baghdadi has fled to Raqqa in Syria before the Iraqi army started its operations in Mosul, but his wife has been arrested, sources said on Monday. 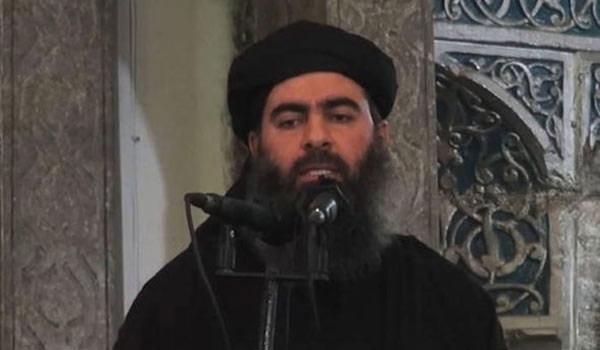 RNA - According to Iraq's Sumeriya News, local sources in Nineveh quoted defected ISIL leaders as saying that al-Baghdadi has managed to escape from Mosul to Raqqa, but his wife has been arrested.

The defected militants stated that senior members of the terrorist group, called the ISIL police, have rebelled against al-Baghdadi and called on his supporters to surrender themselves.

The source did not mention who has arrested Baghdadi's wife, but his words implied that she has been captured during a mutini and by those who rebelled against the terror leader.

The former members of the militant group underlnied that Abu Bakr Al-Baghdadi and ISIL's reign of fear over Mosul has ended.

ISIL militants killed nearly 60 fellow members as the terror group crushed an alleged rebellion plot in Mosul, led by one of the group's commanders who aimed to switch sides and help deliver the group's Iraqi capital to government forces, residents and Iraqi security officials said on Friday.

ISIL executed 58 people suspected of taking part in the plot after it was uncovered last week, Middle East Eye reported.

Residents, who spoke from some of the few locations in the city that have phone service, said the plotters were killed by drowning and their bodies were buried in a mass grave in a wasteland on the outskirts of the city.

Among them was a local aide of ISIL leader Abu Bakr al-Baghdadi, who led the plotters, according to matching accounts given by five residents, and confirmed by Hisham al-Hashimi, an expert on ISIL affairs who advises the government in Baghdad, and by colonel Ahmed al-Taie, from Mosul's Nineveh province command's military intelligence.

The name of the plot leader was not revealed to avoid increasing the safety risk for his family, nor the identities of those inside the city who spoke about the plot.

The aim of the plotters was to undermine ISIL's defence of Mosul in the upcoming fight, expected to be the biggest battle in Iraq since the 2003 US-led invasion.

According to Hashimi, the dissidents were arrested after one of them was caught with a message on his phone mentioning a transfer of weapons. He confessed during interrogation that weapons were being hidden in three locations, to be used in a rebellion to support the Iraqi army when it closes in on Mosul.

"Those were ISIL members who turned against the group in Mosul," said Iraqi counter-terrorism service spokesman Sabah al-Numani in Baghdad.

"This is a clear sign that the terrorist organization has started to lose support not only from the population, but even from its own members."

Signs of cracks inside the ISIL group appeared this year as the group was forced out of half the territory it overran two years ago in Northern and Western Iraq.

Some people in Mosul have been expressing their refusal of ISIL's harsh rules by spray-painting the letter M, for the Arabic word that means resistance, on city walls, or "wanted" on houses of its militants. Such activity is punished by death.

Numani said his service has succeeded in the past two months in opening contact channels with "operatives" who began communicating intelligence that helped conduct air strikes on the insurgents' command centers and locations in Mosul.

A list with the names of the 58 executed plotters was given to a hospital to inform their families but their bodies were not returned, the residents said.

"Some of the executed relatives sent old women to ask about the bodies. ISIL rebuked them and told them no bodies, no graves, those traitors are apostates and it is forbidden to bury them in cemeteries," said one resident whose relative was among those executed.

"After the failed coup, ISIL withdrew the special identity cards it issued for its local commanders, to prevent them from fleeing Mosul with their families," Taie said.

Earlier this month, Sumeriya News cited a local source in the Northwestern Nineveh province as saying that “accurate information” showed Baghdadi’s food had been poisoned by unknown individuals and the food was given to him in Be’aaj district, Northwest of the Iraqi province of Nineveh, near the Syrian border.

The source added that al-Baghdadi and three of his aides have been transferred to an unknown location under strict measures.

Numrous reports had indicated in the last one month that al-Baghdadi and other top commanders of the terrorist cult have started evacuating Mosul in anticipation of the Iraqi army's massive attack to take back the city.

The exact location of al-Baghdadi has been a subject of speculation. However the account on sighting al-Baghdadi has intensified the speculations that the ISIL leader was in Mosul before the start of Iraqi forces' operations to retake the strategic city.

Also reports said in June that al-Baghdadi had been seriously wounded in an airstrike in Western Iraq.

Local sources in Iraq's Nineveh province confirmed that Baghdadi and other leaders in the ISIL were wounded in an air raid on one of the ISIL command headquarters close to the Syrian border.

Baghdadi was seriously wounded by an airstrike on March 18, 2015, that killed the three other men he was travelling with.

He was said to be receiving treatment for spinal injuries after being wounded in that strike.

In mid-May, Iraq's local sources disclosed that al-Baghdadi returned to Iraq from Syria and hid in Nineveh province.

"Al-Baghdadi and a group of ISIL commanders have stealthily returned to Iraq's Nineveh province," the Arabic-language Sumeriya News quoted an unnamed local Iraqi source as saying at the time.

Al-Baghdadi returned to Nineveh province through ISIL-controlled desert roads in Iraq and Syria, added the source.

The source noted that Al-Baghdadi hi in an unknown place in Nineveh province.

The ISIL Leader is running a secret life as his life is at stake more than anyone in the world now. Al-Baghdad's terrorist group is under massive airstrike by the Syrian, Russian and Iraqi Air Forces all throughout the Western Iraq and Eastern Syria.

While reports earlier this year said the ISIL leader was always on the move between Iraq's Mosul and Syria's Raqqa - the self-proclaimed capital of the terrorist group - tips and intel revealed in November that al-Baghdadi had moved from the Syrian city of Albu Kamal to the Iraqi city of Mosul in Nineveh province.

In early March, informed intelligence sources disclosed that the al-Baghdadi had moved from Turkey to Libya to escape the hunt operation of the Baghdad Intelligence Sharing Center after he was traced down and allegedly targeted a number of times in Iraq and the Syria.

"Abu Bakr al-Baghdadi who was injured in Syria was sent to Turkey for treatment and from there he was sent to Libya," the Arabic-language media outlets quoted former Egyptian intelligence officer Hesam Kheirullah as saying.

In December, sources in Libya said al-Baghdadi had arrived in Sirte, the hometown of the slain Libyan dictator Muammar Gaddafi, which is under the control of the Takfiri groups.

Then in October, Iraq's air force bombed his convoy as he was heading to al-Karable to attend a meeting with ISIL commanders. 25 other ISIL militants were killed in the special operation that was the product of the Baghdad Intelligence Sharing Center where the latest intel arrives from Iranian, Russian, Iraqi and Syrian spy agencies round the clock.

The notorious terrorist leader escaped the attempt on his life narrowly, but with fatal injuries. Few hours after the assault, the spokesman of Iraq's joint forces declared that Al-Baghdadi was injured in the Iraqi airstrike on his convoy and was taken away from the scene by his forces.

The terrorist leader was first transferred to Raqqa, where surgeons saved his life but failed to give him a thorough treatment due to a lack of specialized medical equipment.

Sources disclosed a few days later that the ISIL leader had been taken to Turkey for treatment through a series of coordination measures by the CIA.

"The CIA has done the coordination with the Turkish intelligence service (MIT) for transferring al-Baghdadi to Turkey," the Arabic-language al-Manar TV quoted unnamed sources as saying.

After specialists said al-Baghdadi needed months of recovery, one of his aides was appointed to run the cult until the so-called caliph would return to duty.

Al-Baghdad has, thus far, escaped several attempts on his life, making him suspicious of his team of bodyguards.

"While everyone is looking for him in Iraq and Syria, no one expects him to be in Sirte," the Libyan source told FNA, adding, "If he is to be exposed to danger, Sirte would be the last place on Earth for his life to be endangered as it is the safest Takfiri stronghold in the world."

The Syrian army, the National Defense Forces (NDF), the Lebanese Hezbollah and the Syrian and Russian Air Forces, as well as the Iraqi army and popular forces, Al-Hashed Al-Shaabi, have been conducting large-scale operations in Syria and Iraq to end the ISIL control over swathes of lands in the two countries.

Tags: Abu Bakr al-Baghdadi ISIL Mosul
Short Link rasanews.ir/201mOk
Share
0
Please type in your comments in English.
The comments that contain insults or libel to individuals, ethnicities, or contradictions with the laws of the country and religious teachings will not be disclosed