Rasa - Iranian President Hassan Rouhani says the expansion of relations with African countries is among the Islamic Republic’s central policies. 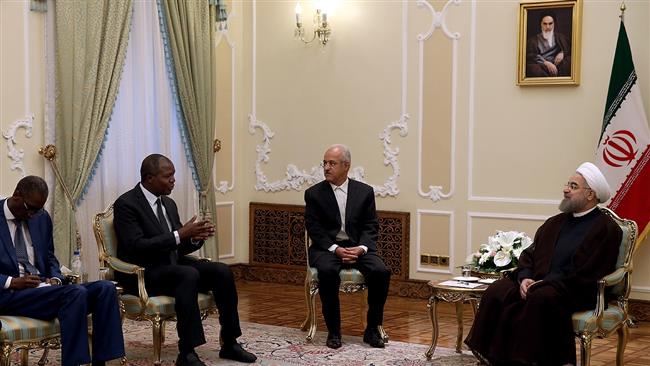 The Iranian chief executive said that the two countries should make use of their capacities to promote relations.

Rouhani highlighted the Islamic Republic’s progress in the fields of technology and engineering, saying Tehran is prepared to help the West African nation advance its development projects.

Elsewhere in his remarks, the Iranian president called for collective efforts by all countries to counter terrorism.

He describe the terrorism as a “major scourge for the world,” adding that the “terrorists have nothing to do with Islam, which is the religion of love, peace and peaceful coexistence.”

More than17, 000 Iranians have fallen victim to terrorist attacks since the victory of the 1979 Islamic Revolution, said President Rouhani, adding that Iran “will spare no effort” to help those countries seeking assistance and cooperation in their anti-terror fight.

Mabri, in turn, stressed the need for concerted efforts to counter terrorism, saying the growth and prosperity of all countries hinges on the establishment of peace and security.

He further voiced his country’s determination to enhance cooperation with the Islamic Republic in all areas, especially in the economic sector.

Tags: Rouhani africa
Short Link rasanews.ir/201mOe
Share
0
Please type in your comments in English.
The comments that contain insults or libel to individuals, ethnicities, or contradictions with the laws of the country and religious teachings will not be disclosed