Rasa - The first multilateral talks on Syria ended Saturday in Lausanne, Switzerland, with no progress toward any actual deal. The talks ended with an agreement to meet again. 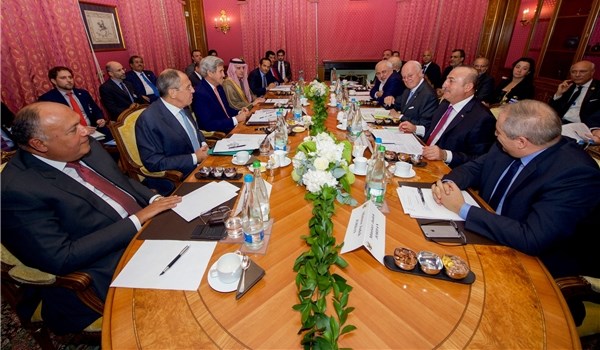 RNA - Exactly what the second round of talks, this time in London, are aimed at is unclear, because no one seems to be in a deal-making mood. Russian FM Sergey Lavrov suggested “some ideas” had been discussed, and among those participating, it’s not clear who they would deal with. It’s clearly not the US, which is going out of its way not to deal with Russia. The other parties at the talks include Iran, Turkey, Saudi Arabia, and Qatar.

Here, the biggest challenge facing the war opponents at the negotiating table (Iran and Russia) is not how to resolve disagreements over post-war elections and majority rule, or any of the underlying grievances and goals that started the war. These are difficult issues, but they are not the most difficult. The greatest challenge is to design a treaty that convinces all US-backed rebels to separate from ISIL and Al-Qaeda affiliates, shed their partisan armies, and surrender conquered territory even though such steps will increase their vulnerability and limit their ability to enforce the treaty's other terms.

When rebel groups obtain third-party security guarantees (for instance from the United Nations) for the demobilization period that follows the signing of an agreement, and obtain power-sharing guarantees in the first postwar government, they will implement their settlement. When groups fail or refuse to obtain such guarantees, the warring factions will eventually reject a negotiated settlement and continue their war.

That explains why the first talks in Lausanne – and the previous talks - ended with no reports of any progress toward any actual deals. The United States and its regional allies are not willing to ask their proxy forces to separate from ISIL and Nusra Front, let alone lay down weapons and decide whether to compromise on their original goal (ouster of President Bashar Assad), and implement the terms of a treaty.

On the other hand, Iran and Russia who have helped Syria retake vast territories from ISIL, Al-Qaeda and other militant groups; who have agreed to meet again at the negotiating table; and who have managed to resolve some of their grievances, still worry that foreign-backed terrorist groups like Nusra Front will once again take advantage of them during the talks or after they sign a new ceasefire agreement, and begin to mobilise and resupply. This was the case after previous ceasefire agreement in Aleppo, during which the United States and its proxies chose to return to war.

In the end, it is the implementation phase, long ignored by Washington and its allies, that is the most difficult to navigate and the reason the previous ceasefire agreements failed. What this does lay out are the conditions under which the next round of negotiations could succeed, the type of multilateral consent and understanding that is necessary to get the warring factions and their key allies through the difficult implementation period, and the timing during which ceasefire is most valuable.

In closing, it has become increasingly evident that a political solution is the only way to resolve a conflict that has already claimed some 400,000 lives and made millions more refugees. The United States and its allies have become bogged down in several wars spreading across the Middle East. They are unlikely to intervene in any significant manner to change the course of events in Syria. To simplify matters, they will have to first distance themselves from terrorist groups and give up on their regime-change illusions.

Their proxy forces are facing similar rifts. The first step to peace, then, is for the rebels to minimise and eliminate the presence of ISIL, Al-Qaeda and their affiliates in their ranks, and to form a united civil front with a cohesive idea of what a post-war and post-elections Syria (emphasis here) should look like.

In order to reverse some of the mistrust that has become entrenched on both sides, acts of good faith are also key. The new talks should be over ending hostilities and sending humanitarian aid, and not over creating conditions to resuscitate and resupply militant groups, or recapture lost territory.

Despite winning the war and not being on the same page with their opponents, Iran and Russia want negotiations to continue more than the United States and its regional allies who seek an escalation, which is a sure recipe for failure. Tehran and Moscow have true commitment to fighting terrorism and bringing the war to an end. They will never boycott the talks as no one wins in this situation; BUT they want real talks with true intentions for peace and settlement.

Tags: US Syria Russia
Short Link rasanews.ir/201mOT
Share
0
Please type in your comments in English.
The comments that contain insults or libel to individuals, ethnicities, or contradictions with the laws of the country and religious teachings will not be disclosed