Rasa - The United States, Britain and the UN special envoy for Yemen have urged the warring sides to the conflict in Yemen to declare an immediate ceasefire. 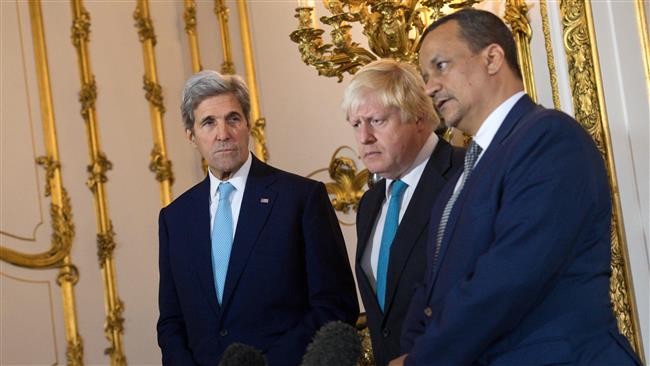 RNA - US Secretary of State John Kerry said after high-level diplomatic talks in London on Sunday that if Yemen's opposing sides accepted the ceasefire, the UN special envoy, Ismail Ould Cheikh Ahmed, would work out some sort of a deal.

"This is the time to implement a ceasefire unconditionally and then move to the negotiating table," Kerry said after meeting with UK Foreign Secretary Boris Johnson and other officials in London, adding, "We cannot emphasize enough today the urgency of ending the violence in Yemen."

Kerry also said there was an urgency to implement a ceasefire "as rapidly as possible, meaning Monday, Tuesday."

The top US diplomat also stated that the conflict in Yemen had generated a humanitarian and health crisis.

"It is a crisis now of enormous proportions with an increasing economic, increasing humanitarian and health crisis, and obviously the military components are troubling to everybody," Kerry stated.

Meanwhile, the British foreign secretary said the conflict in Yemen was "causing increasing international concern; the fatalities that we're seeing there are unacceptable."

"There should be a ceasefire and the UN should lead the way in calling for that ceasefire," Johnson stated.

There have already been several attempts to halt the deadly Saudi aggression against Yemen, but such efforts have been stymied.

The Saudi campaign has come under heavy criticism since an airstrike last week on a funeral in the Yemeni capital Sana'a killed at least 140 people.

The US military provides aerial refueling to Saudi bombers conducting airstrikes on Yemen. Washington has also been providing logistic and surveillance support to the kingdom in the bloody campaign.

Saudi Arabia has admitted that it carried out the airstrike based on what it called bad information.

On October 13, Human Rights Watch said the Saudi airstrike on the funeral was an apparent war crime, adding that Riyadh had used its position in the UN Human Rights Council “to obstruct efforts to establish an international inquiry into ongoing violations in Yemen.”

The Sana’a bombing was not the first attack on civilians by Saudi warplanes, which have targeted busy markets, schools, weddings and hospitals over the past year, resulting in hundreds of deaths and thousands of injuries.

The United Nations Security Council has so far failed to agree on a statement condemning the October 8 Saudi airstrike.

More than 10,000 Yemenis have been killed since the regime in Riyadh launched its campaign in March 2015.

The offensive was meant to undermine the Houthi Ansarullah movement and restore power to the former Yemeni president, Abd Rabbuh Mansur Hadi, who is a staunch ally of Riyadh.

Tags: US Syria Syria UK
Short Link rasanews.ir/201mOO
Share
0
Please type in your comments in English.
The comments that contain insults or libel to individuals, ethnicities, or contradictions with the laws of the country and religious teachings will not be disclosed