US Commitment to N. Deal No Way Related to Iran' Regional, Defense Issues

Rasa - Deputy Chief of Staff of Iran's Armed Forces Brigadier General Massoud Jazzayeri blasted US Secretary of State John Kerry's remarks, and said Washington is not allowed to set conditions for complying with its undertakings under the last year nuclear deal with Tehran. 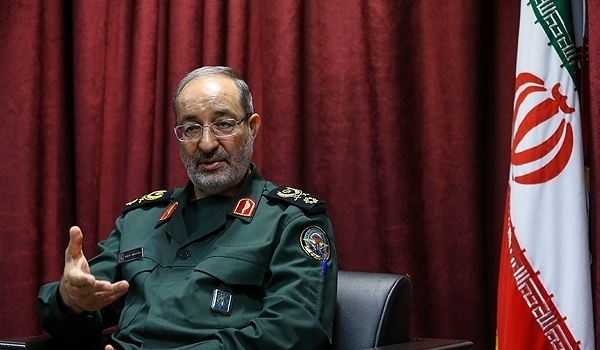 RNA - "No one in Iran allows the US to tie its non-commitment to the resistance front's defensive issues and interests," Jazzayeri said on Sunday.

His remarks came after Kerry told the Foreign Affairs magazine that Iran should halt support for Syrian President Bashar al-Assad and Hezbollah resistance group and stop progress in its missile program to benefit from Washington's support for its banking relations with the European countries.

Jazzayeri underscored that playing game over Iran's defense power doesn’t settle the White House's problems, and said the only way for the US to get rid of the deadlock it has entangled in the region is acknowledging its strategic mistakes and accepting its responsibility for thousands of criminal acts in the region.

"The origin of all the regional problems in West Asia is the US hegemonic policies," he stressed.

His remarks came after Governor of the Central Bank of Iran (CBI) Valiollah Seif once again lashed out at Washington for not complying with its undertakings under the last year nuclear deal with Tehran.

"The status quo is not desirable compared with the expectations before the nuclear deal," Seif said on Saturday.

Noting that the European countries and their banks are interested in cooperation with Iran, he said "but the US has not completely implemented the undertakings that it has accepted under the nuclear deal" and the European banks are lagging in improving relations with their Iranian counterparts given the concerns they have about the US behavior in future.

Seif asked the US to give necessary assurances to the European banks to develop relations with their Iranian counterparts.

Also, earlier this month, Seif lambasted the US for troubling improvement of the relations between the Iranian and European banks in opposition to Washington's undertakings under the last year nuclear deal between Tehran and the world powers.

"Unfortunately, after 9 months of implementation of the nuclear deal, the western side has not taken any effective step to comply with its undertakings, and in certain cases, the large western banks have shown some doubts in the establishment of brokering ties with Iran. This is while it has always been announced that Iran has fulfilled all its undertakings," Seif said in a meeting with German Deputy Economy Minister Brigitte Zypries in Tehran.

He described the US as one of the most important impediments to the normalization of relations between the Iranian and European banks, and said, "I believe that ties between Iran and Europe are normalizing and returning to the past levels, but there still remains certain concerns which have been caused mostly by the US and place hurdles on the way of bilateral ties."

"We expect the European countries to pressure the US to comply with its undertakings," Seif said.

His remarks came after Iranian Foreign Minister Mohammad Javad Zarif underlined that his country will show proper reaction to the US violation of its undertakings under the last year nuclear deal with Tehran.

"We will resist against the US non-compliance and we don’t tolerate it and we will confront the Americans' violation of the nuclear deal," Zarif said early October.

"The US should manage its affairs so that the results of the nuclear agreement would be materialized for Iran and its people," Gabriel said in a joint trade meeting with Iranian officials at Iran's Chamber of Commerce in Tehran early this month.

He stressed the German companies' enthusiasm for developing their activities in Iran, and said, "Now, they consider Iran as their home."

Tags: Massoud Jazzayeri Brigadier General Massoud Jazzayeri IRGC IRGC Iran
Short Link rasanews.ir/201mOI
Share
0
Please type in your comments in English.
The comments that contain insults or libel to individuals, ethnicities, or contradictions with the laws of the country and religious teachings will not be disclosed