UK military under investigation for crimes in Iraq

Rasa - A number of British military forces have been accused of mistreating Iraqi detainees during the 2003 US-led invasion and the subsequent occupation of the Middle Eastern country. 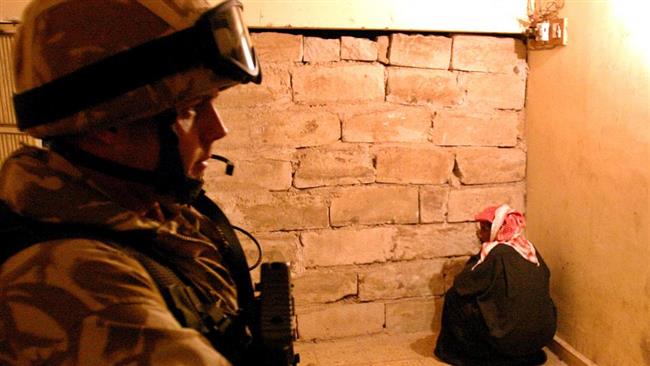 RNA - The Iraq Historic Allegations Team (IHAT) has launched a probe into the ill-treatment of two Iraqi citizens at the hand of British soldiers in the southern Iraqi city of Basra 13 years ago, the Guardian reported Sunday.

Faisal al-Saadoon and Khalaf Mufdhi were detained in 2003, after two British bomb disposal experts were captured during a militant ambush on their convoy and were shot dead later on.

The two suspects were charged with murder and war crimes in 2006, but their sentences were overturned by the Iraqi High Tribunal (IHT) due to lack of evidence.

Public Interest Lawyers (PIL) reported the case to IHAT, which probes cases of torture, murder and mistreatment of Iraqi people by British forces during their 6-year deployment to the Arab country.

Although the case bears significance because it sheds more light on the UK’s role in the destructive occupation of Iraq, it is still far from fulfilling a public demand to hold the main planners of the war accountable.

In March 2003, the US and Britain invaded Iraq in blatant violation of international law, over Iraq's 'weapons of mass destruction'; but no such weapons were ever discovered in the country.

The invasion plunged Iraq into chaos, resulting in years of deadly violence and the rise of terrorist groups like Daesh (ISIL), while leaving more than one million Iraqis dead.

In July, the Chilcot Inquiry, a long-delayed report on Britain’s role in the war, was published, strongly criticizing the government of then-prime minister Tony Blair for its decision-making process in the run-up to the invasion.

However, Blair did not face any hard time for the report’s shocking conclusion that he presented the case for war with “a certainty which was not justified” based on “flawed” intelligence about Iraq's supposed weapons of mass destruction (WMD).

This is while, earlier this month, the government of Prime Minister Theresa May took another step to ensure London’s immunity to legal cases against the British troops by opting out of the European Convention on Human Rights (ECHR).

The UK defense ministry has spent more than £100 million on investigations, inquiries and compensations in connection to the Iraq War.

Tags: UK Iraq
Short Link rasanews.ir/201mOF
Share
0
Please type in your comments in English.
The comments that contain insults or libel to individuals, ethnicities, or contradictions with the laws of the country and religious teachings will not be disclosed