Rasa - Saudi warplanes have killed at least eight people across impoverished Yemen, less than a week after the Saudi war machine massacred over 140 Yemenis at a burial ceremony. 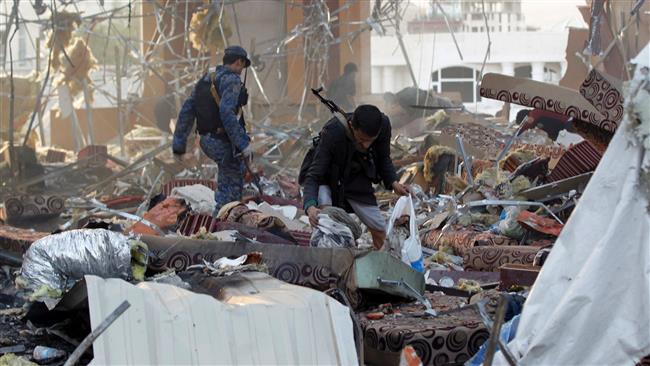 RNA - Saudi fighter jets carried out an airstrike against a residential building in Hidan district in the northwestern Sa'ada province, where two civilians, including a woman, lost their lives and at least three others were wounded. The strike also inflicted heavy damage on the building and its surrounding houses.

Earlier on Friday, another woman was also killed when Saudi troops launched a barrage of missiles against a number of houses and farms in different localities of Shada'a district in the province.

Saudi warplanes also carried out several airstrikes in the Sa'ada districts of Baqim and Zahir, but there have been no reports of the possible casualties.

Four members of a family, including three children, also lost their lives when Saudi jets pounded a house in Harf Sufyan district in the northwestern province of Amran.

Furthermore, another Yemeni civilian was killed and three others were wounded in a Saudi airstrike on a district in the southwestern province of Ibb.

According to a report by Yemen’s official Saba news agency, Yemeni troops inflicted heavy damage on al-Dhaba military camp in Dhahran in the southwestern Saudi region of Asir. No report of the possible casualties as a result of the retaliatory attack has been released yet.

On Wednesday, the Yemeni army, backed by Houthi Ansarullah fighters, killed scores of Saudi soldiers and injured a large number of others after they put a Saudi military convoy under heavy artillery fire and missile attack in Saudi Arabia’s southwestern Jizan province.

The initial reports by Yemeni sources put the Saudi troops’ death toll at 15, but Yemen's al-Masirah television, in an update on Friday, said that at least 40 Saudi soldiers were killed in the attack.

The Yemeni forces say their attacks against the Saudi troops are in retaliation for Riyadh’s devastating war on their country. They have pledged to intensify their attacks amid a surge in Saudi air raids against Yemen.

On October 8, more than 140 Yemeni people were killed and over 525 wounded when a Saudi airstrike hit a community hall in the south of the capital Sana’a, where a funeral for the father of Interior Minister Jalal al-Roweishan was being held. The aerial aggression has drawn condemnation from the international community.

The death toll from the Saturday attack was one of the largest in a single incident since March 2015, when the Riyadh regime began its deadly campaign to crush the Houthi Ansarullah movement and their allies and restore power to the resigned president, Abd Rabbuh Mansur Hadi.

Some 10,000 Yemeni people have so far been killed in the Saudi military campaign, according to the UN.

Tags: Yemen Saudi
Short Link rasanews.ir/201mO5
Share
0
Please type in your comments in English.
The comments that contain insults or libel to individuals, ethnicities, or contradictions with the laws of the country and religious teachings will not be disclosed