Rasa - A source from the Iraqi volunteer forces (Hashd al-Shaabi) disclosed that the operations to liberate the city of Mosul in Nineveh province will start in coming days. 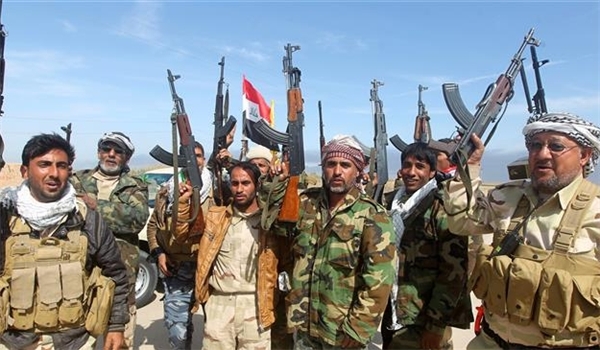 RNA - "Everything has been prepared for starting the military operations in Mosul, only the zero hour to kick off the attack on ISIL's military positions in the city is yet to be announced," the volunteer forces source said.

The source reiterated that Iraqi Prime Minister Haidar al-Abadi has approved the volunteer forces' participation in the Mosul operation.

The Iraqi media had earlier reported that the Mosul operations will start from several directions, the most important of which are al-Qayyara axis located 60 kilometers to the South of Mosul and Sahl Nineveh located 20 kilometers to the East of Mosul.

Several Iraqi army units have been stationed in the Northern part of Mosul over past two days.

Earlier on Saturday, a senior commander of the Iraqi popular forces stressed his forces resolve to block the escape path of ISIL terrorists from Mosul to Syria.

"Our forces will not allow the ISIL militants to flee to Syria and we have gathered precise intelligence about the enemy before starting the Mosul liberation operation," Ahmad al-Assadi, also the spokesman of the popular forces and an Iraqi legislator, said in a statement.

He also rejected media reports on the Iraqi army's agreement with the ISIL to leave Mosul, and said, "There is no deal and the ISIL militants in Nineveh will by crushed in the Mosul battle."

His remarks came as reports said that the US is hindering Iraq's operations in Mosul to provide the ISIL terrorists with an opportunity to flee to Raqqa in Syria.

An Iraqi Kurdish media official said early this month that ISIL's top commanders, including its leader Abu Bakr Al-Baghdadi, have started fleeing Mosul for Syria, adding that as the terrorist group's leader has ordered militants to destroy the city if defeated and forced to withdraw.

Later Mamouziti said that the ISIL militants are fleeing the city since a long-awaited large-scale operation aimed at freeing the second largest city in the country is expected to be launched in the coming days.

Tags: Hashd Al-Shaabi ISIL Iraq
Short Link rasanews.ir/201mO4
Share
0
Please type in your comments in English.
The comments that contain insults or libel to individuals, ethnicities, or contradictions with the laws of the country and religious teachings will not be disclosed