Rasa - Iranian Foreign Minister Mohammad Javad Zarif has held separate talks with his Iraqi and Russian counterparts in the Swiss lakeside city of Lausanne about a solution to the crisis in Syria. 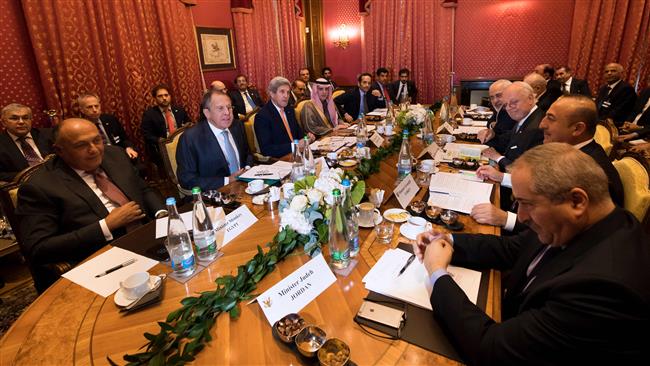 RNA - Zarif held meetings with the Iraqi and Russian foreign ministers, Ibrahim al-Jaafari and Sergei Lavrov, on the sidelines of Syria talks in Lausanne on Saturday.

The Syria talks opened in Lausanne with a fresh format but few new ideas. US Secretary of State John Kerry and his Russian counterpart are joined with foreign ministers of Iran, Iraq, Saudi Arabia, Turkey, Qatar, Jordan and Egypt. UN Special Envoy for Syria Staffan de Mistura is also attending the talks.

There are varying degrees of hope as to whether the talks will be successful in ending the violence in Syria, even if temporarily.

The talks are the latest attempt at international level to find ways of putting an end to more than five years of conflict in Syria. The Syrian government says Washington has been trying to stage such negotiations to facilitate truce deals and buy more time for anti-government militants.

The United States has objected to Russia’s assistance to Syria’s massive operation against militants in the northwestern city of Aleppo, saying the help has undermined peace efforts for Syria. Moscow has rejected the US allegation, while it still is in close contact with Washington.

Through Russia’s aerial support, Syrian forces have managed to retake key areas from militants across the country.

Iran and Russia support the elected Syrian government, while the US, Saudi Arabia, and Turkey back the militants fighting the state.

There have been multiple diplomatic pushes to put an end to the conflict in Syria since it erupted in 2011 but all have ended in failure.

Tags: US Iran Syria Saudi
Short Link rasanews.ir/201mNw
Share
0
Please type in your comments in English.
The comments that contain insults or libel to individuals, ethnicities, or contradictions with the laws of the country and religious teachings will not be disclosed