Rasa - Bahraini protesters have staged a rally to express their solidarity with top Shia cleric Sheikh Isa Qassim and other political prisoners, slamming the Al Khalifah regime for its heavy-handed crackdown on dissent. 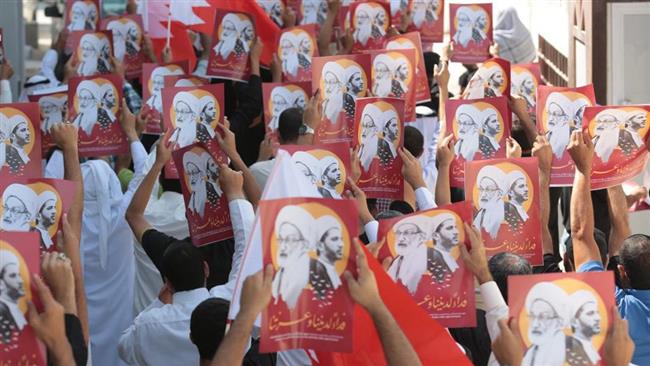 RNA - Several dozens of Bahrainis took to the streets of the northwestern Diraz village, situated about 12 kilometers west of the capital Manama, on Friday, demanding the immediate release of political figures imprisoned by the regime.

They also voiced dissent at the regime’s persecution of the Shia community, denouncing the regime’s decision to impose a ban on holding Friday prayers in the village, which is also hometown to the opposition cleric.

The protesters insisted on their rights to freedom of religion and belief, and condemned the Manama regime’s efforts to restrict them.

On June 20, Bahraini authorities stripped the 79-year-old cleric of his citizenship, less than a week after suspending the al-Wefaq National Islamic Society, the country’s main opposition bloc, and dissolving the Islamic Enlightenment Institution founded by Qassim, and the opposition al-Risala Islamic Association.

In a recent statement, a group of Bahraini clerics said the systematic suppression in the country had reached the highest level ever. They said members of the Shia community felt insecure and faced arrest or prosecution for attending religious congregations, especially Friday prayers.

Bahrain, a close ally of the United States in the Persian Gulf region, has seen a wave of anti-regime protests since mid-February 2011. Scores of people have been killed and hundreds of others wounded or detained in Manama’s ongoing crackdown.

Troops from Saudi Arabia and the United Arab Emirates were deployed in March that year to assist the Manama regime in crushing pro-democracy protests.

Tags: Sheikh Isa Qassim bahrain
Short Link rasanews.ir/201mNr
Share
0
Please type in your comments in English.
The comments that contain insults or libel to individuals, ethnicities, or contradictions with the laws of the country and religious teachings will not be disclosed