Iran vows to stand by Iraq in campaign against terrorists

Rasa - The Iranian Foreign Ministry has denounced the latest deadly bombing attacks in the Iraqi capital of Baghdad, saying the Islamic Republic will support Iraq in its fight against terrorists until their final defeat. 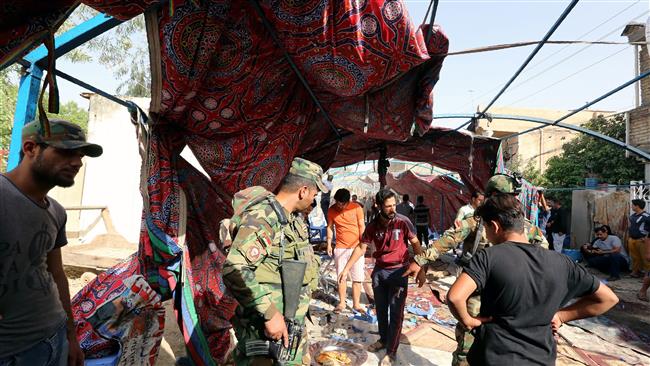 RNA - “Iran will stand by the Iraqi government and nation until the complete defeat of terrorists,” Foreign Ministry Spokesman Bahram Qassemi said on Saturday.

In the deadliest attacks to hit the Iraqi capital in months, at least 41 people were killed and 33 others injured on Saturday when a bomber detonated an explosive vest among Shia mourners at a religious gathering in the north of Baghdad.

The bomb went off inside a tent which was set up in a crowded market in Baghdad’s al-Sha’ab district. The Daesh Takfiri terrorists claimed responsibility for the attack.

Also on Saturday, terrorists attacked two areas north of Baghdad, killing a further 12 people, according to the police.

Qassemi once again stressed the importance of strengthening joint cooperation among all countries to fight terrorist and Takfiri groups and urged the international community to effectively support the Iraqi government and nation in their anti-terror campaign.

The Iranian spokesperson expressed hope that the ominous phenomenon of terrorism would be eliminated across the region through reinforced unity and integrity among the Iraqi people.

He also offered his sympathy to the Iraqi government, nation and the families of the victims of the terrorist attacks which came as the Iraqi forces are preparing for an operation to retake the strategic northern city of Mosul from Daesh terrorists.

At least nine people lost their lives and nearly a dozen people were injured after a bomber set off his explosives in the east of Baghdad on October 9.

Daesh unleashed its campaign of death and destruction against Iraq in 2014, seizing the northern city of Mosul and declaring it as its so-called headquarters.

The United Nations says more than 1,000 people lost their lives and over 1,500 others suffered injuries as a result of acts of terrorism and violence across Iraq in September 2016 alone.

Tags: Iran Iraq
Short Link rasanews.ir/201mNq
Share
0
Please type in your comments in English.
The comments that contain insults or libel to individuals, ethnicities, or contradictions with the laws of the country and religious teachings will not be disclosed