Co-Belligerent: US Entered Yemen War Directly From Day One 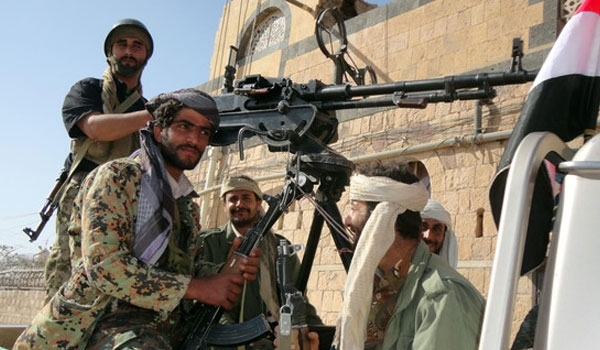 RNA - American officials claim the attack, which was in retaliation for an alleged missile attack on a US Navy destroyer three days earlier - which was rejected outright after one Saudi journalist reported that it was a misfire by a Saudi navy, while a second one said it was a blue-on-blue fire by the Saudi Navy - was for the first time. It was not:

The United States is one of at least a dozen countries participating in or backing a coalition, including Saudi Arabia, Egypt, Morocco, Jordan, Pakistan, Sudan, United Arab Emirates, Kuwait, Qatar, Bahrain and Britain. They have all been involved directly in the 18-month war.

In March 2015, the coalition led by Saudi Arabia began the bombing campaign against the poorest country in the Middle East on the pretext of containing Ansarullah resistance movement, which four months earlier had seized Yemen’s capital and deposed the country’s US- and Saudi-backed dictator. Since then, the US has flown refuelling missions for Saudi aircraft, supplied targeting intelligence, and resupplied the military aggression with tens of billions of dollars of weapons.

In fact, long before the military aggression, the US was busy conducting direct attacks against Al-Qaeda - which controls vast territory in central and eastern Yemen. The US directly engaged the whole nation when the Saudi war began, by helping the coalition planes target civilian objects, refuel their planes, resupply their military machines, and maintain a strict naval and aerial blockade of the country.

Add to this the dispatched US warships to the Bab al-Mandab Strait which connects the Red Sea to the Gulf of Aden, the ongoing project to build an American naval base on an occupied Yemeni island, as well as the US economic sanctions and restrictions, and pretty much you get the idea why it is indeed silly to suggest that Washington engaged directly in this dirty war few days ago.

In fact, what the United States did to the Yemeni radar systems that controlled voyage of foreign vessels in Bab al-Mandab was a response to the targetting of a UAE navy vessel that had been rented from the US. The Emirati warship was an HSV-2 Swift type of warship that had been used by the US navy in several military operations since 2003 when the US attacked Iraq. The UAE warship was targeted with Yemeni missiles in Al-Mukha coastal waters in the province of Ta'iz near Bab al-Mandab.

Tragic enough, that's not all. The Wednesday attack came after the first sign that the Obama administration might be having second thoughts about the massacres committed by the Saudis with US weapons. Few days earlier, the Saudi coalition had bombed a funeral in Sana'a, killing and wounding some 900 civilians in one of the worst massacres of the war. Fragments of British and US-made bombs were photographed at the scene.

The White House responded by promising to initiate a review of its assistance to Saudi Arabia, and issued its first public threat to stop supporting the coalition. However, by attacking Ansarullah’s positions it is now abundantly clear that Washington’s security cooperation with Riyadh is a blank check. The US is not prepared to adjust ist support so as to better align with international law, and this act in haste and repent at leisure attitude doesn’t appear to be changing.

Notably, numerous internal government documents exposed by the US media as well as Washington’s diplomatic support for the Saudi war crimes at the United Nations Security Council, equally cast doubt on such claims, revealing that Washington was the one that gave the green light to the Saudis to attack Yemen in the first place. Washington is also in the know that its military campaign is killing thousands of civilians and implicate the US in war crimes.

Little wonder State Department lawyers have their hair on fire. Prominent human rights groups and some US officials who have requested anonymity charge that Washington could be complicit in Saudi war crimes. They say there is a compelling case for war crimes charges to be filed against the United States.

Long story short, since March 2015, the Obama administration has deployed troops, assisted the coalition in identifying bomb targets and conducting intelligence. It has sent warships to enforce the naval blockade that has choked off critical imports, contributing to a crisis that has left at least 21 million people in desperate need of food.

If this is not enough to prove that the US government has been directly involved in this humanitarian catastrophe from day one, we don't know what else is.

Tags: US Yemen Saudi
Short Link rasanews.ir/201mNb
Share
0
Please type in your comments in English.
The comments that contain insults or libel to individuals, ethnicities, or contradictions with the laws of the country and religious teachings will not be disclosed