Rasa - The Iraqi army says it is ready to begin the ultimate push to liberate Mosul from the Takfiri Daesh terror group amid Baghdad’s tensions with Ankara over its military presence in the Arab country’s north. 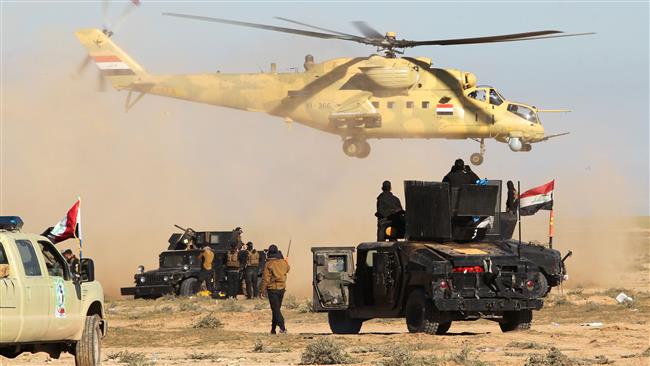 RNA - Reports on Friday said the forces were assuming position ahead the final assault, while Chief of Staff of the Army First Lieutenant General Othman al-Ghanemi said the troops were awaiting the go-ahead.

Earlier in the day, the military chief had met with various commanders of the armed forces to coordinate the long-awaited offensive.

It has reportedly been agreed that the Peshmerga forces of the semi-autonomous Kurdistan Regional Government in northern Iraq move in first followed by servicemen enlisted with the army.

Potential liberation of Mosul would be a severe blow to Daesh, which has named the city as its so-called headquarters since capturing it in 2014.

The terror group, based on intelligence information, has reportedly between 4,000 and 5,000 terrorists in the city, making the situation more complicated.

Washington and dozens of its allies have been conducting military operations in Syria and Iraq since September that year. The campaign has fallen severely short of its avowed aim of dislodging Daesh.

Iraqi Prime Minister Haider al-Abadi has variously asserted that all troops participating in the Mosul offensive are from Iraq, and no foreigners would be among them, adding that the US-led coalition would only support the operation.

On Friday, Turkey’s state-run Anadolu Agency said forces trained by the Turkish military at the Bashiqa camp in northern Iraq will take part in the planned operation.

Ankara sent troops northeast of Mosul last year in a move which Iraq considers a “blatant violation” of its sovereignty.

Baghdad has, time and again, called on Ankara to pull out the forces, while specifically warning against Turkish troops’ involvement in the upcoming battle, which it says they would only complicate.

Tags: DAESH Mosul Iraq
Short Link rasanews.ir/201mNa
Share
0
Please type in your comments in English.
The comments that contain insults or libel to individuals, ethnicities, or contradictions with the laws of the country and religious teachings will not be disclosed