Rasa - President Francois Hollande says France has “a problem with Islam” and that there are too many refugees arriving in the European country, sparking outrage among human rights groups. 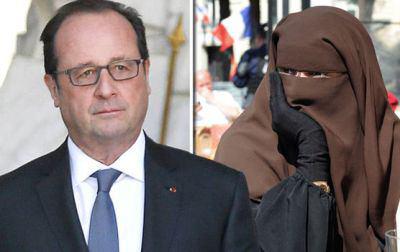 RNA - "It's true that there's a problem with Islam. No one doubts it," Hollande is quoted as saying in a new book published this week.

"It's not that Islam poses a problem in the sense that it is a dangerous religion, but in as far as it wants to affirm itself as a religion of the Republic."

Hollande, whose desperately low popularity ratings make it uncertain as to whether he will stand for a second term in office, made the comments in an interview with Le Monde journalists Gérard Davet and Fabrice Lhomme. The controversial remarks are published in the 660-page book, A President Should Not Say That: Secrets of Five Years in Office.

The comments are likely to ignite fierce political debate in the run-up to next year’s presidential election.

The anti-Islamophobia campaign groups accuse the French government and political class of being responsible for igniting anti-Muslim sentiment.

On immigration, the French leader told the authors: “I think there are too many arrivals, immigrants who shouldn’t be there … we teach them to speak French and then another group arrives and we have to start all over again. It never stops … so, at some point it has to stop.”

Refugees fleeing war and persecution in conflict zones in the Middle East and North Africa have been flowing into the European continent over the past several years. Many blame the West for the militancy and violence that has displaced millions of people in the Middle East, mainly Syrians, causing the huge refugee influx into Europe.

France, along with other Western countries, supports militant groups fighting to topple the government of Syrian President Bashar al-Assad in Syria.

Many hardened militants hail from France itself, raising fears they might hit back at the heart of Europe when they return home.

On the issue of the veil, the French president also suggested that today’s “veiled woman” could become a Marianne, the female symbol of the French republic.

“If we can offer her the right conditions for her to flourish, she will remove the veil and become French, all while remaining religious if she wants to,” the French president noted.

The remarks follow tensions in France over a controversial ban on Muslim women’s full-body swimwear, known as burkini.

Mayors in about 30 French coastal resorts banned burkini this summer, but France’s highest court ruled this week that the ban is “seriously and clearly illegal.”

Despite the ruling, as many as 28 French mayors still defiantly uphold the ban while right-wing politicians have pledged to pass legislation at a central government level to maintain the law.

Meanwhile, a notorious French mayor has sparked outrage among rights groups after putting up anti-refugee posters warning that "they're coming" to his southern town of Beziers

"The state is imposing them on us," the poster reads. "Migrants in our town center."

The controversial move by Beziers Mayor Robert Menard – a member of the far-right National Front party – is in response to the government’s plan to relocate refugees from the north coast to dozens of sites across France, as authorities aim to demolish the notorious “Jungle” migrant camp near Calais.

Some 40 refugees are slated to be relocated to Beziers.

“I’ll do everything to ensure that these migrants don’t settle in,” Menard, who has been mayor since 2014, told French radio on Wednesday.

The posters have been strongly criticized by Emmaus, a French group that works with refugees and homeless people, which described them as “sickening.”

Human rights groups and anti-Islamophobia campaigners argue that the problem is rooted in the government’s policies to isolate Muslims in the country, which is believed to have the largest population of Muslims in Western Europe.

As a result of such policies, activists say, Muslims have been forced to move to impoverished suburbs, with substandard schools, insufficient housing and high unemployment.

Tags: France Islam Hijab Islamophobia
Short Link rasanews.ir/201mNX
Share
0
Please type in your comments in English.
The comments that contain insults or libel to individuals, ethnicities, or contradictions with the laws of the country and religious teachings will not be disclosed