Rasa - The Boko Haram Takfiri terrorist group has released 21 of the schoolgirls abducted in 2014, official says. 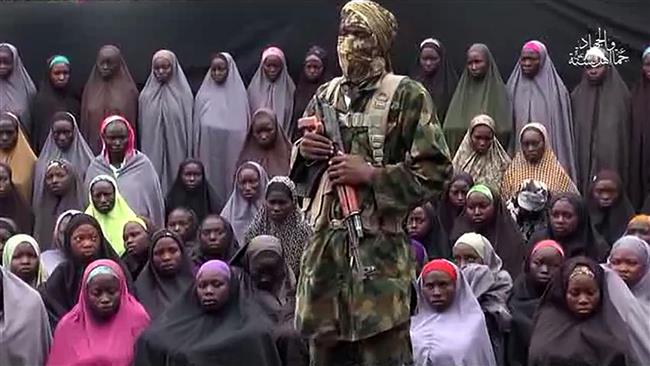 RNA - “It's true. [The] ministry of information will release a statement on the issue later,” an unnamed Nigerian government official in the office of President Muhammadu Buhari was quoted as saying by AFP on Thursday.

A local source was also cited as saying that the girls were swapped for four Boko Harm prisoners held in the recently liberated town of Banki, which borders Cameroon, located in northeastern Nigeria.

On April 14, 2014, Boko Haram kidnapped 276 girls from their secondary school in the northeastern town of Chibok in Borno state. About 60 of the girls managed to escape afterward, but the fate of the remaining others remains unknown.

The Bring Back Our Girls, which has campaigned for releasing the girls form the grips of terrorists over the past two years, said in a statement that the identity of the girls had yet to be confirmed.

“We cannot confirm anything yet,” said Aisha Yesufu, the campaign’s leader.

In August, the terror group released a new video purportedly showing some of those girls and called for the release of comrades in exchange for the freedom of the abductees.

A masked militant claimed in the video that some of the girls were still alive, and the others had been killed in airstrikes carried out by the Nigerian air force on the Boko Haram compound.

Nearly 20,000 people are said to have been killed in the six-year Boko Haram militancy, mainly in northern Nigeria. Buhari has given his military commanders until early November to end the Boko Haram violence.

Tags: Nigeria Nigeria Boko-Haram
Short Link rasanews.ir/201mNE
Share
0
Please type in your comments in English.
The comments that contain insults or libel to individuals, ethnicities, or contradictions with the laws of the country and religious teachings will not be disclosed