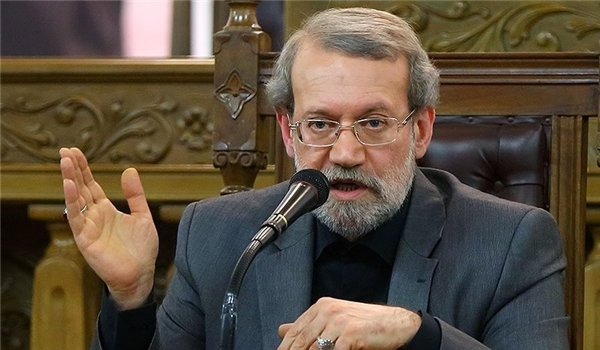 R‌NA - "They (the western countries) do not want the Syrian crisis to be resolved, and intend to create discord among Muslims,” Larijani said on Wednesday.

He reiterated that the situation in Syria has changed in a way over past few weeks that certain regional countries have now become more determined to disrupt the regional equations in their own favor.

Earlier this month, Chairman of the Iranian parliament's National Security and Foreign Policy Commission Alaeddin Boroujerdi blasted the US for its blatant support for terrorism, and said Washington uses ceasefire in Syria to reinvigorate the terrorist groups.

"The Americans' positions and performance in Syria show their clear support for the terrorist groups," Boroujerdi said.

Noting that the US uses ceasefire in Syria to strengthen the terrorists, he said, "This has happened several times and the terrorist groups have practically misused any ceasefire."

Boroujerdi referred to the recent US bombing of the Syrian army positions in Deir Ezzur, and said, "This shows again the Americans' blatant support for the terrorist group and their opposition to the Syrian army's anti-terrorism forces."

His remarks came after Syrian Deputy Information Minister Ali al-Ahmad stressed that Iran and Russia are helping Damascus in its anti-terrorism efforts to prevent Washington's implementation of its unilateralism policies.

"I never believe that Russia will change its positions under the US pressures since this issue is not merely related to Syria and its national security but it is related to Russia's future geopolitics and governing the world and therefore, it is correct that the war in Syria is its own battle, but there is no doubt that it is also Iran and Russia's battle to prevent the US move to rule the world unilaterally," Ahmad said.

Noting that Russia doesn’t want any conflict with the US or NATO, he said that such a conflict will be highly dangerous for international peace and security.

Meantime, Ahmad underlined that Tehran and Moscow will never withdraw from the achievements they have gained, and they will become more powerful each day and partner in governing the world.

Tags: US Iran Syria Larijani
Short Link rasanews.ir/201mMo
Share
0
Please type in your comments in English.
The comments that contain insults or libel to individuals, ethnicities, or contradictions with the laws of the country and religious teachings will not be disclosed