Rasa - Sayyed Hassan Nasrallah, the leader of Lebanon’s Hezbollah resistance movement, says a new intifada (uprising) is the right choice for Palestinians to fight the Israeli regime’s occupation of their homeland. 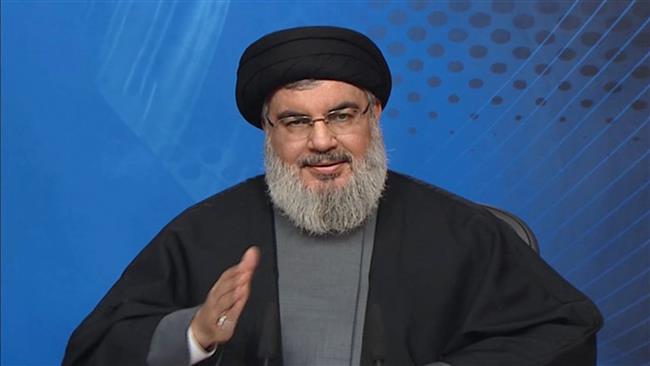 RNA - He made the comments on Wednesday in a ceremony held in Beirut to observe Ashura, which marks the martyrdom anniversary of Imam Hussein, the third Shia Imam.

The Hezbollah head praised “heroic Palestinian operations” against the regime in Tel Aviv, saying such an uprising will exhaust the Zionist enemy and will eventually make it end its occupation of Palestinian lands.

Throughout his speech, Nasrallah touched on the crises and terror threats plaguing several Muslim nations of the Middle East, including Yemen, Iraq, Bahrain and Lebanon.

“Our enemies do their best to detect positions of weakness across our ranks; however, they will never manage to reach their goals,” the Hezbollah leader said.

The Hezbollah secretary general once again slammed the brutal Saudi war against Yemen, saying the kingdom is irked by the neighboring nation’s refusal to submit to its will.

The Saudi regime does not favor an “independent” and “courageous” Yemen, and has launched a war of hatred against the Arabian Peninsula state, said Nasrallah.

Hundreds of thousands of Yemeni fighters are ready to make sacrifices in the battle against Saudi invaders, stressed the Hezbollah head.

During Ashura mourning ceremonies across Lebanon, thousands of Shia Muslims chanted slogans in solidarity with the oppressed people across the world, especially those in war-torn Yemen.

Nasrallah had earlier called on Shia mourners to support the cause of Yemen, which has been under deadly Saudi attacks for more than a year, during Muharram rituals.

‘Beware of US plot in Mosul’

The Hezbollah chief also pointed to the upcoming Iraqi battle to liberate the Daesh-held city of Mosul, warning the Iraqi leadership of a possible American plot to hamper the counter-terrorism operation.

Nasrallah further hailed the sacrifices of Hezbollah resistance fighters in their struggles to defend Lebanon.

He said the resistance movement will always be ready in southern and eastern Lebanon to protect the country against the threats posed by the Israeli regime and the Takfiri terrorists active in neighboring Syria.

Tags: US Palestinian Mosul Nasrallah Hezbollah
Short Link rasanews.ir/201mMm
Share
0
Please type in your comments in English.
The comments that contain insults or libel to individuals, ethnicities, or contradictions with the laws of the country and religious teachings will not be disclosed