Rasa - The Russian ships deployed off the Syrian coasts on the Mediterranean Sea discovered the bodies of civilians, including women and children, murdered by terrorists in Northern Syria floating on water. 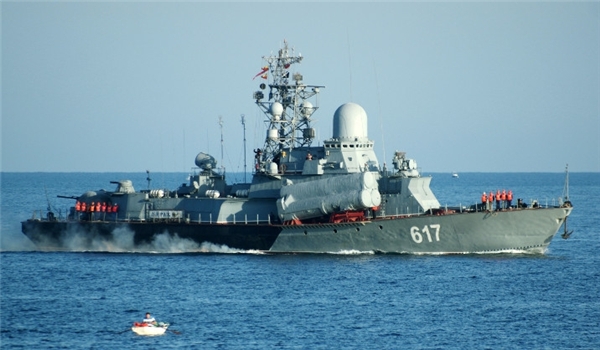 RNA - Ships of the Russian fleet sailing in the waters of Syria have discovered the bodies of women and children murdered by the terrorist groups there, the Russian navy servicemen told RIA Novosti in Sevastopol.

"The crew regularly sees the bodies of civilians brutally murdered by terrorists in the waters around Northern Syria, the majority of whom are women and children. They take them out of the water and bring them to Tartus for burial, in accordance with the Islamic traditions," a source in the navy said.

The serviceman said that the Syrian authorities have asked Russian sailors on several occasions to retrieve the bodies of civilians murdered by the terrorists.

"The last time, the ship collected more than ten dead bodies. They were around 200 nautical miles North of Tartus. There weren't bullet wounds on the bodies, they had been killed by cold weapons," he said.

Earlier this month, Russian Foreign Ministry said that terrorists of Fatah al-Sham Front (formerly known as al-Nusra Front) are using civilians as their shield during battles in Syrian Northern city of Aleppo, noting that ongoing situation in the flashpoint city remains tense.

"The situation in Syria remains tense, especially in the Northern parts of the country with battles going on in Aleppo and around it where al-Nusra Front militants use civilians as human shield," Russian Foreign Ministry spokeswoman Maria Zakharova said last Thursday.

"So far we see in the actions of primarily Western countries no concern for the humanitarian situation in Syria, but the desire to protect al-Nusra, its affiliated forces and other militant groups," Zakharova said.

Tags: Terrorist Syria Russia
Short Link rasanews.ir/201mMd
Share
0
Please type in your comments in English.
The comments that contain insults or libel to individuals, ethnicities, or contradictions with the laws of the country and religious teachings will not be disclosed