Rasa - A southeast Calgary Islamic centre was vandalized late Friday evening, and a community leader is hoping the person responsible comes forward, because he wants to start a conversation. 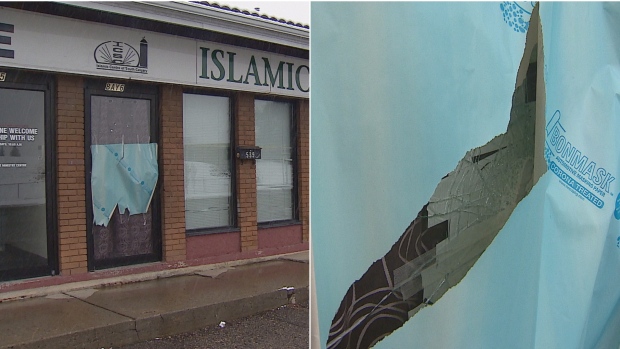 RNA - A southeast Calgary Islamic centre was vandalized late Friday evening, and a community leader is hoping the person responsible comes forward, because he wants to start a conversation.

The glass on the door of the Islamic Centre of South Calgary in Queensland was broken.

A burnt copy of the Quran and a hateful letter greeted members of the Musallah Saturday morning, the centre's president told CBC News.

"Vandalizing anybody's place of worship, to me, is a despicable way to act," Junaid Mahoon said.

"Anybody who does that, in any name, including hate or Islamophobia, we should oppose and discourage that."

The incident comes just days after vile, anti-Muslim posters were posted across the University of Calgary campus.

Last December the Tuscany LRT station was covered with racist graffiti which resulted in an eight-month jail sentence for one of the two offenders.

Mahoon says these and other incidents in the province, have some community members on edge.

"People were quite disturbed and shocked because they have heard and seen all of this on media, but they never imagined that it could happen in their own backyard."

Mahoon, however, wants dialogue with the person who targeted his centre, not revenge.

"As Muslims, we are taught in Islam to love our neighbours, work with our neighbours, be part of their grief and happiness. In that spirit I would like to say we forgive the perpetrator, whoever did this, broke the glass and burned the Quran, and we offer our peace, love and harmony to him," he said.

"We also want him to come forward and sit down with us and have a dialogue so at least we can answer some of his questions that led him to do this and create some kind of understanding."

The community has been supportive, Mahoon said.

He says a letter left behind targeted Muslims.

"Muslims are coming in, the refugees are coming in to Canada. They are being looked after. The Canadians that were here, like him, see that it is changing the Canada as he knows and as he believes in Calgary," Mahoon said.

"He wants to give the message to the government that he is against that. Muslims should be kept in check. The Donald Trump style is probably seen as ideal because he mentioned his name.

"Things that are not conducive to a multicultural and understanding society."

While Calgary police confirm to CBC News the incident is being investigated, Mahoon said a conversation needs to take place sooner than later, because his community isn't going anywhere.

"I think we can overcome this thing by working together, by helping each other and creating a dialogue," he said.

"This is our home, my kids were born here, I chose to come to this country and I am here to stay. This is my home."

Tags: Muslim Vandalize Islamic Centre
Short Link rasanews.ir/201mMZ
Share
0
Please type in your comments in English.
The comments that contain insults or libel to individuals, ethnicities, or contradictions with the laws of the country and religious teachings will not be disclosed