Rasa - By now, many people around the world are familiar with the Saudi-led, US-backed war on Yemen that it may not be good for world peace and security, but it’s damn good for America and its regional allies. 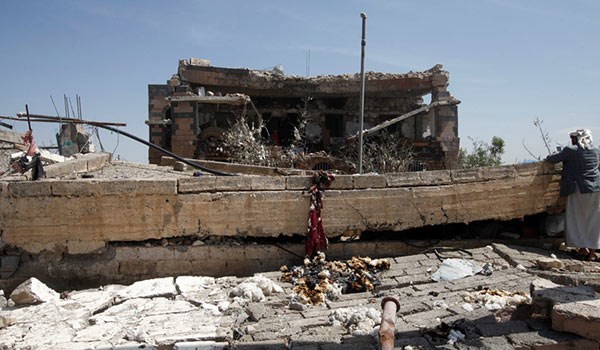 RNA - Washington’s and Riyadh’s litany of sleazy UN theatrics, replete with anti-Iran attacks, racist slurs, and colonial-authoritarian assaults on basic human rights and International Humanitarian Law has dominated this dirty war, and the mass media have profited from and amplified the circus every step of the way. But for those who hold even the smallest commitment to International Law, this carnivalesque war is problematic for at least some of the following reasons:

1- Superficial news coverage, reports, inquiries and emergency sessions deprive UN member states of the ability to think about actual foreign policy goals in this show. As per UN Charter and international protocols, all members states must be informed about the actual foreign policy objectives of the United States and Saudi Arabia - which is ensuring regional domination and protecting Israel among others - in order to cast informed votes at the General Assembly, Security Council, and Human Rights Council.

2- The Saudi-American obsession with Iran prohibits UN members from being exposed to alternative solutions to this war, which are either neglected or blackballed from General Assembly sessions and resolutions.

3- At many UN sessions the criminal hordes are accusing Iran of doing this and that – for instance supplying Ansarullah with weapons without presenting a shred of evidence. They are not saying what other UN member states stand for – which is ending the conflict. Far from it, the member states are largely or entirely divorced from reality. In this war, if Iran is anything, it’s an American-Saudi creation.

4- Iran, “the troublemaker of it all” may disturb some UN member states, but it’s ultimately beside the point for media corporations. Their silly accusations against Iran are as predictable as the war’s dreadful consequences and human sufferings; so long as they profit from the show, they will keep elevating Iran’s non-existent role in the conflict above anything else – even when hundreds of civilians are killed in indiscriminate and condemnable Saudi bombardments.

5- Ultimately, it’s not clear whether blaming Iran would even make a difference in this failed military campaign, particularly in light of the UN-challenged nature of Saudi airstrikes on civilian objects. Superficiality in accusing Iran is a constant these days, and this is no surprise to those who have studied this sort of thing in similar conflicts in Iraq, Syria and Libya -  which, by the way, have turned into similar disasters for the United States, Saudi Arabia, and the deplorable extras.

Needless to say, that’s a bad thing. It suggests that the dominance of the United States, NATO and Saudi cash at key UN bodies such as the Human Rights Council is not actually related to the “legality” of their platforms, thinking, and “inquiries”, but rather springs from their unholy alliance, complicity in war crimes, and fear of international backlash.

Mind you, with the deeply disturbing fixation on the panic-mongering and cheap political theatre of “Iran threat”, alternative ideas on how best to end the conflict are left unexamined. Recent interviews with journalists across Europe and the United States find that policymakers in Washington and Riyadh reject the idea of directing greater coverage toward such ideas.

What this perspective misses is that, in a heavily divided society like the United Nations, the vast majority of information the member states receive from Saudi and American ambassadors comes from their media. So if alternative solutions are blackballed from the news, it ensures that the propagandists will be even more effective in saturating UN sessions with false information, thereby further drowning out any prospect for a peaceful solution to the conflict.

This kind of policy has likely contributed to the systematic failure of the United Nations in resolving the conflict as well as mass ignorance in the public mind regarding who the real troublemakers are and what they stand for in the poorest country in the Middle East.

Tags: US Iran Yemen Saudi
Short Link rasanews.ir/201mMW
Share
0
Please type in your comments in English.
The comments that contain insults or libel to individuals, ethnicities, or contradictions with the laws of the country and religious teachings will not be disclosed