US seeks to partition Syria to serve Israel: Nasrallah

Rasa - Seyyed Hassan Nasrallah, the secretary general of the Lebanese resistance movement, Hezbollah, has warned of plots by the US, Saudi Arabia and their regional allies to partition Syria in order to serve the Israeli regime’s interests in the Middle East. 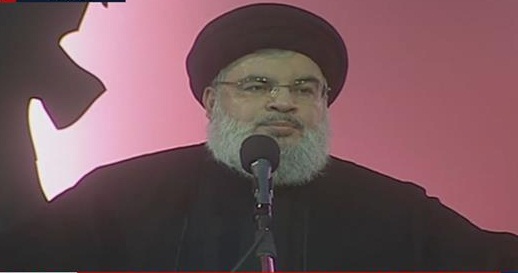 RNA - The “real goal” of the countries that have neither democracy nor elections was not democracy or elections in Syria, Nasrallah said on Tuesday.

“The goal was for Syria to fall and be fragmented and be ripped apart” in line with Israel’s interests, he added.

Nasrallah made the remarks at the at Sayyed al-Shohada Complex in the Lebanese capital, Beirut, on the ninth day of the lunar month of Muharram, Tasu'a, the eve of the martyrdom anniversary of Imam Hussein, the third Shia Imam and his 72 companions.

He said the Daesh Takfiri militants and al-Qaeda affiliate terrorists Jabhat Fateh al-Sham, formerly known as al-Nusra, “are being used to serve and achieve US, Israeli goals.”

Nasrallah further said that the US seeks to concentrate Daesh terrorists in eastern Syria, adding that Washington is allowing and "opening the roads for" Daesh militants to flee Iraq into Syria.

He cited the recent "deliberate action" by the US to launch airstrikes against Syrian army positions in eastern Syria as an example of Washington's attempts to boost Daesh in the region.

Pointing to a recent abortive truce deal between the US and Russia on Syria, the Hezbollah chief said Washington withdrew from the agreement because it called for the separation of Jabhat Fateh al-Sham from other militant group and the identification and targeting of Daesh and Jabhat Fateh al-Sham positions.

Nasrallah said the US, Saudi Arabia and their regional allies are obstructing a diplomatic solution to the crisis in Syria and the easing of the sufferings of the Syrian people.

He expressed regret that "more escalation and tensions" are on the horizon in Syria, but called for "perseverance and firm stance" in order to counter the plots of the country's enemies.

The Hezbollah chief said Syria's foes sought "a decisive victory within a few weeks" but have faced stiff resistance from the Syrian government and nations and their allies for over five years.

Tags: US Syria Nasrallah Hezbollah
Short Link rasanews.ir/201mMV
Share
0
Please type in your comments in English.
The comments that contain insults or libel to individuals, ethnicities, or contradictions with the laws of the country and religious teachings will not be disclosed