Rasa - Spokesman of Yemen's Ansarullah movement took Washington responsible for the Saturday massacre of the Yemeni people in the capital city of Sana'a by the Saudi-led coalition. 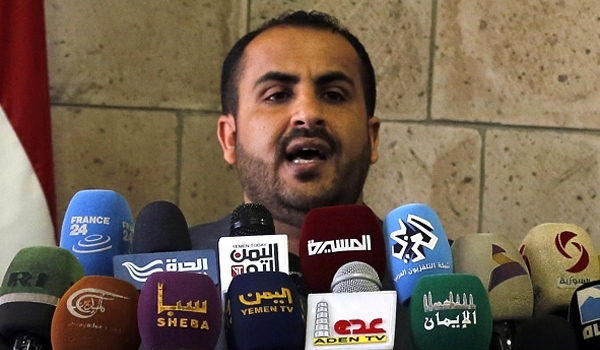 "The Saudis and the Americans are two sides of the same coin and the order to launch attack against Yemen was issued from Washington; the bombs are US-made, the fighter jets are US-made, the US (military) know-how has been used and Washington supports them (the Saudis) logistically," he added.

In relevant remarks on Monday, the leader of Yemen’s Ansarullah movement condemned the recent Saudi airstrike targeting a funeral in the capital city of Sana’a and blamed first and foremost the United States for the deadly attack.

Abdul Malik al-Houthi, the leather of Yemen’s Ansarullah movement, addressed the nation in a televised speech, condemning the Saudi-led airstrikes against the impoverished country and expressing particular disdain for the United States as the primary weapon supplier and supporter of the coalition that has engaged in indiscriminate bombings of schools, hospitals and civilian infrastructure.

"The United States is the first and foremost party responsible for the carnage," al-Houthi said.

"Those killing Yemenis are morally bankrupt, which has driven them to perpetrate any sort of crime. The Saudis are killing Yemenis by means of US weapons and military aircraft. They strike where Americans pinpoint and allow," he added.

Reports from Yemen's capital said on Saturday that over 900 people were killed or wounded in massive air raids by the Saudi-led coalition warplanes.

Saudi Arabia has been striking Yemen since March 2015 to restore power to fugitive president Mansour Hadi, a close ally of Riyadh. The Saudi-led aggression has so far killed at least 11,500 Yemenis, including hundreds of women and children.

Tags: Yemen Ansarullah Saudi
Short Link rasanews.ir/201mMN
Share
0
Please type in your comments in English.
The comments that contain insults or libel to individuals, ethnicities, or contradictions with the laws of the country and religious teachings will not be disclosed