Yemenis Should Oppose the Saudi-Led, US-Backed War With Every Fibre of Their Being

Rasa - The leader of Yemen's Ansarullah movement says the Saturday attack in which over 900 people were killed and wounded in Sana’a points to the frustration of the United States and Saudi Arabia in their failed war on the impoverished nation. 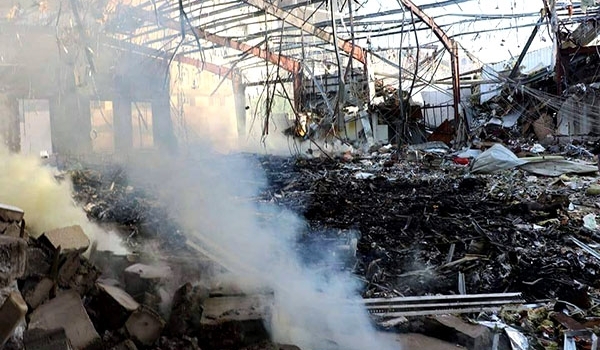 RNA - Abdul Malik al-Houthi says the Saudis would not have carried out the airstrike if they had not received the green light from Washington. He further says that the United States is the first and foremost party responsible for the carnage.

After the funeral home attack, the White House issued a statement of “concern”, announcing an “immediate review” of the level of US support to be provided to the Saudi-led war against Yemen. US National Security Council Spokesman Ned Price warned that US cooperation with Saudi Arabia is “not a blank check”.

If true, this would be a dramatic shift. The problem is, throughout the war the US has been an eager apologist for the huge number of civilians killed in the conflict, and backed Saudi efforts to keep the war crimes from being investigated by the UN. So good intentions aside, the US will continue to back the Saudi war and play multiple roles - participating in the naval blockade and refuelling Saudi bombers.

The horrific tragedy now unfolding is the result of Washington’s support for the overthrow of Yemen’s government by the Saudis and regional allies. The tide at the United Nations will never turn toward the dirty war, given Washington’s support for the wholesale slaughter of the Yemeni people, encouraging a military solution, and not holding Saudi human rights abusers accountable for their crimes.

If their goal is to kill as many civilians as possible, that's because both the US and Saudi Arabia are accustomed to committing mass murder and genocide. They are morally bankrupt and this has driven them to perpetrate any sort of crime. Mind you, the Saudis are killing Yemenis by means of US weapons and military aircraft. They strike where Americans pinpoint and allow. They do all this and more under Washington's direct oversight and central role. This has been, in effect, US policy in Yemen, and it never runs counter to US national-security interests. After all, the US Empire of Bases is also busy building a military base there.

While it is certainly the case that innocent people will continue to die because of this policy AND the indiscriminate Saudi bombardment, it's a waste of time and effort at the United Nations to revive diplomacy in pursuit of a renewed ceasefire. As before, this would only give way to the imperatives of self-righteous indignation at the risk of a wider war.

Therefore, the people of Yemen have no choice but to fight back. As maintained by former president Ali Abdullah Saleh, the entire country should mobilise for revenge attacks, increase battle readiness, and move on the Saudi border.

This would seem to be a risky course of action for the Yemenis to take, but there is no other way. Saudi Arabia and the United States are intentionally spreading chaos throughout strategic portions of the Middle East, leaving virtually no independent state standing to protect their resources, especially oil, from Western exploitation. This goal is being achieved by backing various terrorist groups and with great human sufferings, while also achieving the subsidiary goal of protecting Israel and enriching the behemoth Military-Industrial Complex.

The Saudi-led, US-backed war on Yemen is all about hate and destroy. There is no doubt that both Riyadh and Washington have proven themselves to be of the kind; indeed, the very nature of their foreign policy is destruction, chaos and sectarian warfare.

Given this, it is at best foolish and naïve for the Yemeni people of any political stripe, but particularly the UN member states, to put any stock in the notion that Washington and Riyadh are acting in the defense of human rights, democracy, legitimacy or any such lofty goals in the Yemen war.

There is only one proper goal, then, of the people of Yemen – to reduce themselves to unity and oppose foreign aggressors with every fibre of their being.

Tags: Yemen UN Saudi
Short Link rasanews.ir/201mME
Share
0
Please type in your comments in English.
The comments that contain insults or libel to individuals, ethnicities, or contradictions with the laws of the country and religious teachings will not be disclosed