Rasa - Though he attended a Baptist church on a fairly consistent basis, Arif Abdullah said he grew up without a strong connection to Christianity — or any other religion, for that matter. 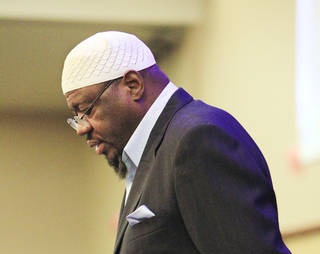 RNA - Though he attended a Baptist church on a fairly consistent basis, Arif Abdullah said he grew up without a strong connection to Christianity — or any other religion, for that matter.

That changed in the late 1970s when the 1977 Douglass High School graduate was introduced to the Islamic faith by members of the Nation of Islam, who regularly preached their black separatist perspective to passers-by on the streets of northeast Oklahoma City.

“I was introduced to Islam on the streets. I didn't join the Nation of Islam, but I went with that ideology,” he said.

Soon he was attending prayer and teaching gatherings at the Masjid Mu'Min, considered to be the oldest mosque in the state.

Abdullah said he began attending the mosque after the congregation had disconnected from the Nation of Islam in the late 1970s and began connecting to Muslims worldwide and what he describes as “mainstream Islam.”

Abdullah said he officially accepted Islam on Thanksgiving Day 1983, when he arrived at the mosque to purchase some copies of the Quran, the Islamic holy book.

He said he had read “The Autobiography of Malcolm X” and the writings of W. Deen Mohammed, who became leader of the Nation of Islam after the death of his father in 1975.

W. Deen Mohammed rejected the black separatist leanings of his father, renamed the Nation of Islam to the American Society of Muslims and converted the organization's meeting places into traditional Islamic mosques.

Abdullah said he did not believe the Nation of Islam's black separatist teachings that blacks were gods and all white people were devils. He said the organization's emphasis on black empowerment did serve as an initial draw, because he grew up under the oppression and bigotry of Jim Crow.

However, “it was my humanity that pulled me back from actually believing it,” he said of the bigoted doctrine.

Abdullah said he was chosen to become the imam of Masjid Mu'Min 17 years ago and has worked to establish it as a place where individuals and families may learn about Islam and grow in their Islamic faith tradition.

The imam said 45 to 50 people worship regularly at the mosque (Jummah prayers and holy days bring more followers), which he said is about 75 percent black. He said many Muslim immigrants arriving from other countries visited the mosque not far from the state Capitol and worshipped there for a time in the 1960s, 1970s and 1980s before some of them established mosques in other parts of the metro area and state.

Abdullah said black Muslims in Oklahoma had to strive to gain acceptance as Black Muslims in a majority-Christian nation with a history of bigotry against blacks.

He said he sees Muslim immigrants from the Middle East striving for that same acceptance in a nation where many non-Muslims are suspicious and fearful of people who follow Islam.

“The immigrant here in America is fighting the fight now that we had to fight when we started. They are fighting to be accepted. They are trying to get people to feel comfortable with them,” he said.

Abdullah said he and members of his mosque have enjoyed interacting and collaborating with other Muslims and mosques around the metro area and state.

And they are looking forward to celebrating the opening of a new mosque and family life center that has been constructed behind the current mosque.

The 5,500-square-foot-building will seat 100 to 150 people and is more expansive than the current mosque, which seats about 75, Abdullah said.

Tags: Muslim refugee Mosque Oklahoma
Short Link rasanews.ir/201mMB
Share
0
Please type in your comments in English.
The comments that contain insults or libel to individuals, ethnicities, or contradictions with the laws of the country and religious teachings will not be disclosed