Saudi Arabia, allies no match for Iran on battlefield

Rasa - Iran's chief Armed Forces spokesman says Saudi Arabia and its allies are too weak to engage in a military confrontation with the Islamic Republic. 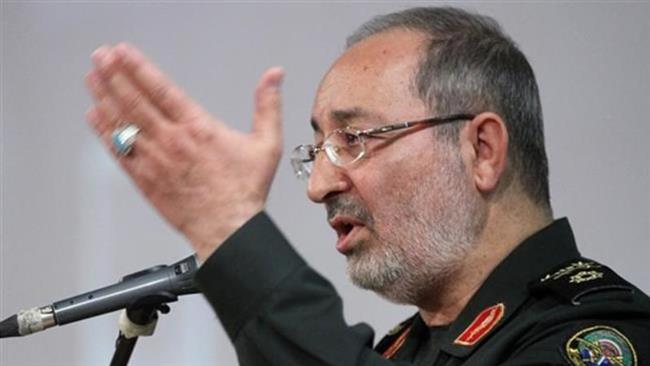 RNA - “Saudi Arabia has by no means the capability to confront Iran and [in fact] not only Saudi Arabia, but its allies are also incapable of confrontation with the Islamic Republic of Iran,” Deputy Chief of Staff of Iran's Armed Forces, Brigadier General Massoud Jazayeri, said in response to a question by reporters on Monday.

He added that Saudi Arabia “counts for nothing [against Iran] and is no match for the Islamic Republic of Iran in the region to aspire entering military scenes.”

“The Americans also lack such a capability and will,” the Iranian commander pointed out.

He said the Iranian Armed Forces and the country’s defense power have created such a deterrent force that “our big enemies will not allow themselves to make such plans and arrangements” for a military conflict with the Islamic Republic.

Jazayeri further pointed to the recent military exercises by Saudi Arabia in the Persian Gulf, the Sea of Oman and the Strait of Hormuz and said, “Saudi maneuvers were a routine parade and a mediocre and low-level mission according to our observations.”

He added that Riyadh made efforts to “hype up its military and technical dimensions” through media propaganda.

Iran’s Islamic Revolution Guards Corps (IRGC) on October 5 issued a stern warning to all military vessels partaking in Saudi Arabia's war games, saying any act of transgression into Iran's territorial waters would be met with an immediate and befitting response.

The strongly worded statement addressed all Saudi and non-Saudi naval vessels that were part of the maneuvers, suggesting that the IRGC views the ongoing war games as an evident attempt to foment tensions and compromise sustainable security in the Persian Gulf.

Back in August, Iranian Defense Minister Brigadier General Hossein Dehqan said the Islamic Republic’s naval forces were monitoring all movements in the Persian Gulf and would confront any vessels intruding into the country's territorial waters.

Iran has invariably asserted that it only uses its naval might for defensive purposes and to send across the Islamic Republic’s message of peace and security to other nations.

Tags: US Iran Persian Gulf Saudi
Short Link rasanews.ir/201mM4
Share
0
Please type in your comments in English.
The comments that contain insults or libel to individuals, ethnicities, or contradictions with the laws of the country and religious teachings will not be disclosed