Iraqi premier assures pilgrims of security in Karbala on Ashura

Rasa - Iraqi Prime Minister Haider al-Abadi has discussed security plans with local officials in the holy city of Karbala for the Ashura mourning ceremonies, set to take place this week. 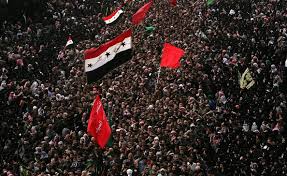 RNA - "God willing, the preparations for the pilgrimage (of Ashura) is continuing. I invite the pilgrims to do the pilgrimage in the best way possible and to be assured that security forces are watchful and will ensure their comfort and safety, so they can come and go back home safely," al-Abadi said at a security news conference in Karbala.

Al-Abadi earlier held a meeting with officials and security chiefs at the Karbala governorate building.

This comes as Karbala is welcoming an ocean of black-clad mourners who are converging on the holy city to take part in the Muharram processions. Each year, in Muharram, mourning ceremonies are held all over the world to mark the martyrdom anniversary of the third Shia Imam and Prophet Muhammad’s grandson, Imam Hussein (PBUH), and his companions in the epic battle of Karbala.​

Elsewhere in his remarks, the Iraqi premier added that the long-awaited operation to liberate the northern city of Mosul will be launched as scheduled. "The preparations for Mosul operations are proceeding according to a schedule set by us, I will not announce it. God willing, (the operations) will start when the time comes to begin liberating the city."

The Iraqi army and pro-government forces have been preparing for months to attack the Takfiri Daesh terrorists in Mosul, which fell into the hands of the terrorists in 2014.

The United Nations High Commissioner for Refugees (UNHCR) in Iraq says an estimated 700,000 people would need assistance once the offensive gets underway.

Addressing the presence of Turkish troops on Iraqi soil, al-Abadi said that they were "impeding" their efforts to fight Daesh militant group.

Abadi also earlier stated that his country “does not want to enter into a military confrontation with Turkey,” adding that “the behavior of the Turkish leadership is not acceptable by any standard.”

The Iraqi Foreign Ministry has recently called for an emergency UN Security Council meeting over the presence of several hundred Turkish troops inside Iraq, and Turkish parliament’s decision to extend the deployment by another year.

The Iraqi Foreign Ministry summoned Turkish Ambassador to Baghdad Faruk Kaymakci over the extension on Wednesday.

Tags: karbala Ashura Iraq
Short Link rasanews.ir/201mM0
Share
0
Please type in your comments in English.
The comments that contain insults or libel to individuals, ethnicities, or contradictions with the laws of the country and religious teachings will not be disclosed