Rasa - The leader of Yemen’s Ansarullah movement condemned the recent Saudi airstrike targeting a funeral in the capital city of Sana’a and blamed first and foremost the United States for the deadly attack. 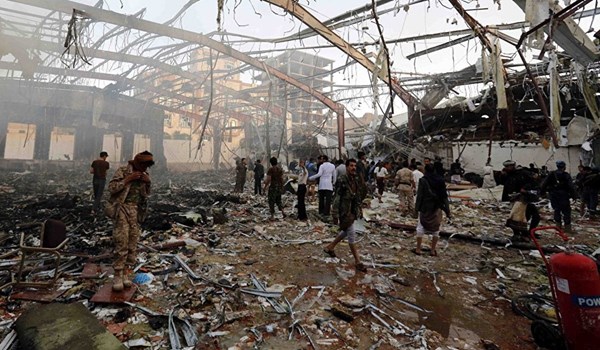 RNA - Abdul Malik al-Houthi, the leather of Yemen’s Ansarullah movement, addressed the nation in a televised speech condemning the Saudi-led airstrikes against the impoverished country and expressing particular disdain for the United States as the primary weapon supplier and supporter of the coalition that has engaged in indiscriminate bombings of schools, hospitals and civilian infrastructure, RIA Novosti reported.

"The United States is the first and foremost party responsible for the carnage," al-Houthi said.

"Those killing Yemenis are morally bankrupt, which has driven them to perpetrate any sort of crime. The Saudis are killing Yemenis by means of US weapons and military aircraft. They strike where Americans pinpoint and allow."

Washington has long looked to hold together the reputation of the Saudi coalition despite repeated horrific airstrikes against civilian crowds including a bombing one month earlier around a rally one-month earlier of over 1 million people in the city square of the capital of Sana’a.

Nonetheless, the international community has attempted unsuccessfully to condemn the Saudi-led coalition with the United Nations even including the forces on its annual "child killers" list until Saudi Arabia threatened UN Secretary General Ban Ki-Moon that they would pull all funding from the United Nations programs and get regional allies to respond in kind.

"Saudis have a black criminal record of killing innocent people. They have a cruel and evil nature, and do not respect independence of other countries. The Saudi king (Salman bin Abdulaziz Al Saud) would not have dared to attack Yemen if it had been without US consent," al-Houthi stated.

The Ansarullah leader called on all able bodied Yemenis to engage in retaliatory counter attacks against the Saudi Arabian regime leading many in the international community to fear an escalation of the crisis in Yemen.

In a statement regarding the horrific airstrike against the Yemeni people, the US National Security Council Spokesman Ned Price said: "US security cooperation with Saudi Arabia is not a blank check."

"Even as we assist Saudi Arabia regarding the defense of their territorial integrity, we have and will continue to express our serious concerns about the conflict in Yemen and how it has been waged," said Price.

"In light of this and other recent incidents, we have initiated an immediate review of our already significantly reduced support to the Saudi-led coalition and are prepared to adjust our support so as to better align with US principles, values and interests."

Tags: Yemen Saudi
Short Link rasanews.ir/201mLu
Share
0
Please type in your comments in English.
The comments that contain insults or libel to individuals, ethnicities, or contradictions with the laws of the country and religious teachings will not be disclosed