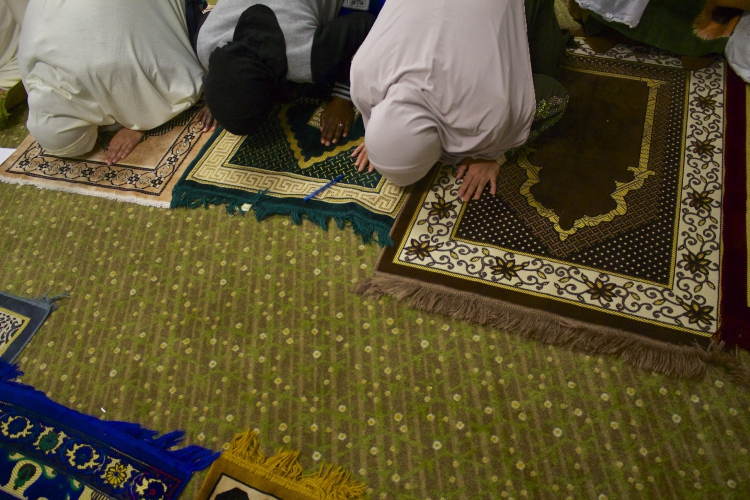 RNA - This isn’t the first election Faizah Mask has felt nervous about, but for her, the prospect of a Donald Trump presidency is downright scary.

“The way he’s just singled out (groups),” said the Pittsfield resident. She spoke from personal experience, as both a woman and a Muslim – two groups at the center of this year’s volatile campaign.

Among his many comments, Trump has proposed a ban on all Muslims entering the United States and also suggested surveillance on mosques in the wake of the Paris terrorist attacks.

Trump has accused Hillary Clinton and U.S. Sen. Elizabeth Warren of “playing the woman card,” and made degrading remarks toward Fox News host Megyn Kelly, personality Rosie O’Donnell, and others.

Chatting with other women after Juma’h Prayer at the Islamic Society of Greater Concord, Mask – who is Malaysian but has been in New Hampshire for two years and before that, Chicago – said she’s always voted Democrat since first registering to vote in 2008. This year, she plans to do it again.

“There’s no other option,” she said.

She is somewhat unique among the Concord Muslim community in that she can make a choice about who she wants as president. Of the half dozen women at the mosque recently, Mask was the only one with U.S. citizenship.

Sheema Shireen, a Penacook resident who came to the U.S. from India 10 years ago, is still waiting for her citizenship. In the meantime, she works as a computer programmer for the state Department of Health and Human Services.

Shireen and Mask said the women in their mosque don’t really talk politics, either because they don’t have time – they have to get back to work after a midday service – or because they can’t vote anyway.

Mask’s husband and president of the Islamic Society of Greater Concord, Hubert, said not more than just a handful of men attending the mosque services have gained their citizenship, either.

“We’re still a young community and an immigrant community,” Mask said. Of the 35 men that attended Friday prayers last week, he said only five or six had gained citizenship.“It’s a very limited amount,” he said.

Looking past the small number of registered voters, as a group, Muslims are a quiet voice in New Hampshire. Pew Research Center data show less than one percent of the state population identifies as a follower of Islam.

Following a Friday midday prayer service about maintaining patience and faith through tribulation, Hubert Mask encouraged anyone who could to use their voice in the 2016 election.

“By all means, go out and vote,” he said. Mask asked people to support their “Muslim brothers in government,” since, he said, “This is one way we can get more people to learn about us and us about them.”

Mask, an Arkansas native and retired law enforcement officer, said this election year has been different than any other he’s experienced.

“This is the first election in my lifetime that has promoted bigotry, in my opinion,” he said. “We feel like this year the political campaign has not just addressed Muslims, it has addressed anybody who appears as a minority.”

The effect appears to be especially pronounced within the Muslim community, however. A September report by the national Muslim advocacy group CAIR (Council on American-Islamic Relations) shows a spike in anti-Muslim incidents in recent months, including rocks thrown through windows of a Nashua mosque and a woman wearing Islamic attire in New York City whose blouse was set on fire outside a store.

CAIR characterized these and other incidents as “the inevitable result of the ongoing mainstreaming of Islamophobia we are witnessing in our society.”

In New Hampshire, both Hubert and Faizah Mask said they hadn’t personally experienced any discrimination or hate.

Faizah said she’s had several people come up and complement her on her long dress and headscarf while shopping in Market Basket, and another time in Pittsfield, Mask said a gentleman came up to his wife to ask her whether she was hot in her outfit.

He added that while it’s a tumultuous year, he said he expected people to come around the more they learned about their fellow, Muslim-American citizens.

“I think time heals most things,” Mask said. “I think deep down inside, people care.”

Mask said he and the others in the Concord Muslim community want others to know they care, too, despite the negative narrative about Islam.

“We’re just trying to assimilate in the country,” Mask said. “We’re not trying to impose anything on anybody.”

He said of ISIS and other terrorist organizations, “People that are doing horrendous and heinous things are hijacking religion.”

Mask added that in Islam, “the main thing is treating people the way you want to be treated, and that’s with respect. We really don’t have any desire to have conflict.”

The suggestion of Muslims wanting to impose Sharia law on others in America is often misleading, Mask said. It’s a framework to handle public and private legal issues, based on an Islamic body of law said to be given to the Prophet Muhammed by God. It is interpreted differently based on where it is practiced.

“Here, Sharia law is strictly a basis to go to an Imam to ask how to solve things such as inheritance with the family,” he said. “It doesn’t overide anything,” he added, noting that federal, state and local laws are to be followed, too. “It just handles things personally.”

He said that rather than segregate themselves within their religion, those at the Concord mosque are making efforts to be involved in the community beyond welcoming any and all to their services.

They volunteer for the New Hampshire Food Bank, work with the Greater Concord Interfaith Council. They live in the area and pay taxes, too.

Mask added that he and other mosque leaders stay in touch with law enforcement with any concerns about youth radicalization.

“We’ll address it anytime,” he said. The mosque is trying to do better, too, Mask said, with reaching out to local schools to ensure Muslim students aren’t being bullied.

At the top of that list for the next month is exercising one of the most basic duties of a community member and a U.S. citizen – voting.

Mask plans to do so, though he declined to name a candidate. He did say he was a registered Democrat.

Tags: Muslim US
Short Link rasanews.ir/201mLn
Share
0
Please type in your comments in English.
The comments that contain insults or libel to individuals, ethnicities, or contradictions with the laws of the country and religious teachings will not be disclosed