Saudi War on Yemen: One Home and 213 Funerals

Rasa - On Saturday, October 8, Saudi warplanes attacked a funeral home in the Yemeni capital city of Sanaa, killing at least 213 people and wounding 534 others. 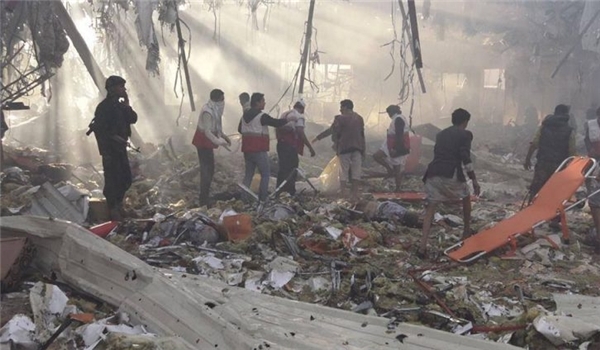 RNA - The attack targeted the funeral of the father of the Ansarullah Interior Minister Jalal al-Rowaishan. It is unclear if the interior minister was present at the time, though the mayor of Sana’a was present and confirmed killed in the attack. Some reports, still awaiting confirmation, suggest the death toll could exceed even further.

This marks the single largest incident of civilian deaths in the Saudi war, topping a previous incident in which 131 were killed at a wedding. It also adds pressure to the nations supplying Saudi Arabia with arms, in particular the United States and Britain, to scale back arms sales and stop providing Saudis with intelligence in targeting civilian objects.

The problem is, just last month, the US decided to go ahead with a $1.15 billion arms sale to Saudi Arabia, leading human rights groups to decry the US as "indifferent to Yemen's misery." Britain, too, is reportedly in talks over a multi-billion-pound arms contract with Saudi Arabia.

True, the White House has announced an “immediate” review of US support for the Saudi-led coalition in wake of the funeral bombing. But that's all really. Washington, which has been a major arms supplier to Saudi Arabia from day one, will never distance itself from Riyadh, even when it says it is “deeply disturbed” and promising to review its military support for Riyadh so as to better align with US principles, values and interests, including achieving an immediate and durable end to Yemen’s tragic conflict.

Notwithstanding appearances, US military cooperation with Saudi Arabia is a blank check and it is precisely here that no one wants to put at risk this mutual benefit society:

The bombing took place less than three weeks after the US Senate greenlighted a $1.15 billion deal selling military equipment to Saudi Arabia. The Senate did so by blocking a bill opposing the controversial sale due to Saudi Arabia’s role in the Yemeni conflict and Riyadh’s human rights record.

As long as the US allows this pattern to continue, Saudi Arabia and its lackeys will continue to take advantage of the situation - taunting, acting out, and getting their way. The US has never launched a single investigation into civilian casualties and Saudi war crimes in a campaign it is part of. It has never put its foot down making the House of Saud’s rogue regional leadership face the international consequences for their destructive behaviour.

On the contrary, Official Washington has helped Riyadh turn Yemen into a failed state and a badlands for terrorists who have spread their killing sprees far and wide. Worse yet, the finest minds of the United Nations have remained silent and guaranteed strategic failure against the ostensible grave threat of Saudi Arabia and it's Wahhabi proxies.

It is said truth may be stretched, but cannot be broken and always gets above falsehood. In blatant violation of international law, the US not only refuses to tamp down the panic-mongering and cheap political theatre of “Iran threat”, but also continues to supply the Saudis with banned weapons – cluster bombs and phosphorous munitions - with which to flatten Yemeni neighbourhoods, take civilian lives, generate refugees, and strengthen ISIL and Al-Qaeda.

This way the Military-Industrial Complex can make money through arms race, the Wahhabi extremists can destabilise the planet, and the US Army can then send in drones and Special Forces to take out a handful of Al-Qaeda and ISIL operatives and save the world. It is what we call approaching spiritual doom.

Tags: Yemen UN Saudi
Short Link rasanews.ir/201mLm
Share
0
Please type in your comments in English.
The comments that contain insults or libel to individuals, ethnicities, or contradictions with the laws of the country and religious teachings will not be disclosed