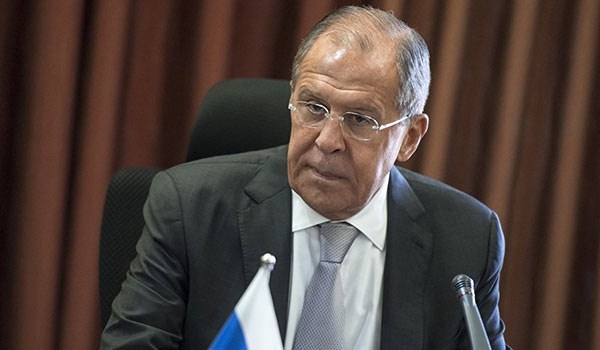 RNA - Sergey Lavrov noted that this fact is understood by several senior US officials themselves that that  US-led coalition attack against Syrian army would represent a flagrant violation of international law, Sputnik reported.

The Russian foreign minister made the remarks after media reported earlier this week that White House officials were considering US military attacks against Syrian army airfields.

"I think that the 'hot heads' there will be calm downed and will treat the issue seriously. The good news is that according to the leaks, but it is a very reliable piece of information, a number of senior figures in the US administration understand very well that any attack on ground targets, which belong to the Syrian army, is a flagrant violation of international law," Lavrov told Russia's Channel One in an interview.

"There were leaks that the cruise missiles could easily hit Syrian Air Force airfields, and the Syrian air force would no longer fly. The General Staff has already reacted on this. This is a very dangerous game, given that Russia, being in Syria at the invitation of the legitimate government of this country and having two bases there, one airbase in Hmeymim and the Russian Navy base in Tartus, has air defenses there to protect our facilities," he added.

Sergey Lavrov also added that Washington came up with a vague reason to thwart Russian-US deal on the Syrian ceasefire.

"Washington invented a vague rather than a specific reason to foil the agreements, claiming that Russia did not want to stop hostilities that bring suffering to civilians," Lavrov said.

The real reason for the United States to curb cooperation was that Washington failed to convince Syrian opposition militants to withdraw from Castello road in the city of Aleppo, Lavrov suggested.

Lavrov also notified that Moscow used to show strategic patience regarding Washington’s actions for a long time, but the relations between the United States and Russia have dramatically changed.

“To my mind, this is a fact. Frankly, we have been showing what in the United States is called the ‘strategic patience’ for a very long time, as the unilateral deterioration of the relations on the US part started long before the Ukrainian crisis,” Lavrov said, commenting on the drastic changes in the relations between Moscow and Washington.

In 2014, relations between Russia and the West deteriorated amid the crisis in Ukraine. Brussels, Washington and their allies imposed several rounds of sanctions on Russia over Crimea's secession from Ukraine and Moscow's alleged meddling in the Ukrainian conflict. Russia has repeatedly refuted the accusations, and warned that the sanctions are counterproductive and undermine regional and global stability.

Tags: Sergey Lavrov Syria Russia
Short Link rasanews.ir/201mLj
Share
0
Please type in your comments in English.
The comments that contain insults or libel to individuals, ethnicities, or contradictions with the laws of the country and religious teachings will not be disclosed