Rasa - The Islamic Movement in Nigeria (IMN) has vowed to challenge a state ban declaring the group's activity as unlawful. 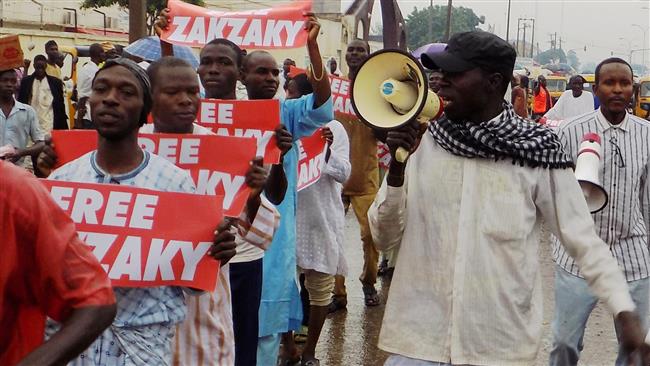 RNA - "Very soon, we shall challenge this ban," a spokesman for the group, Ibraheem Musa, said on Saturday.

On Friday, the Nigerian state of Kaduna banned the movement led by Sheikh Ibrahim Zakzaky as illegal, as a state crackdown against the Muslim community continues.

Musa said members of the movement were not going to be intimidated by the ban, adding, however, that they would resort to "legal and peaceful means."

The Kaduna state government threatened that IMN members could be imprisoned, fined or both for participating in activities organized by the group.

The IMN is accused of "unlawful processions" and "obstruction of public highways" since last December when the army forces clashed with members of the group.

On December 12, 2015, Nigerian forces attacked Shias during a ceremony at a religious center in the city of Zaria.

The forces claim the Shias in the ceremony had blocked an army convoy passing through, attempting to assassinate the army chief of staff who was in the convoy.

One day after the incident, Nigerian forces attacked the home of Sheikh Zakzaky, arresting the prominent cleric after killing his supporters.

A judiciary investigation into the incidents concluded that army forces had killed 348 members of the religious community in the two-day attacks.

“The true horror of what happened over those two days in Zaria is only now coming to light. Bodies were left littered in the streets and piled outside the mortuary. Some of the injured were burned alive,” said Netsanet Belay, Amnesty International’s Research and Advocacy Director for Africa.

Meanwhile, Zakzaky has been held in "illegal" custody, without trial or charge, by Nigeria's security agency, since his arrest last December.

Over the past months, Nigerian people have staged protest rallies across the country demanding Zakzaky’s immediate release from custody.

Tags: Zakzaki Nigeria
Short Link rasanews.ir/201mLg
Share
0
Please type in your comments in English.
The comments that contain insults or libel to individuals, ethnicities, or contradictions with the laws of the country and religious teachings will not be disclosed