US root cause of mischief in Persian Gulf: Iran commander

Rasa - A senior commander of Iran’s Islamic Revolution Guards Corps (IRGC) says the United States is not authorized to interfere in the affairs of West Asia and the Persian Gulf, stressing that Washington is the root cause of mischief in the region. 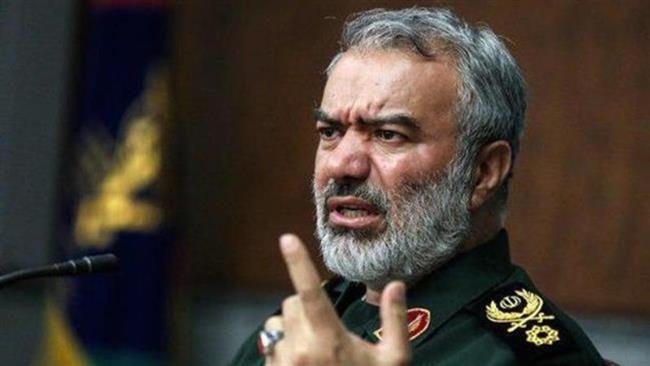 RNA - “They [the US] are conducting their acts of mischief in the Persian Gulf and the West Asian regions … with two objectives. Their first objective is to fulfill their own interests and the second one is to show their hostility towards [Iran’s] Islamic Revolution,” Rear Admiral Ali Fadavi, the commander of the IRGC Navy, said on Saturday.

Despite the enemy’s mischief, there is sustainable security in the Persian Gulf and the Strait of Hormuz thanks to the Islamic Revolution’s power, he added.

Fadavi emphasized that the IRGC Navy is responsible for maintaining security in the Persian Gulf and the Strait of Hormuz and will fulfill the important duty “in the best form and with full power.”

Since the victory of the 1979 Islamic Revolution in Iran, the US acts of mischief have backfired, constantly weakening the Americans, he said.

The Iranian commander further emphasized that global economy and development depend on security in the Persian Gulf because the region holds the main source of energy in the world.

Fadavi’s remarks came after the IRGC on Wednesday issued a stern warning to all military vessels partaking in Saudi Arabia's ongoing war games in the Persian Gulf, the Gulf of Oman and the Strait of Hormuz, saying any act of transgression into Iran's territorial waters would be met with an immediate and befitting response.

The strongly-worded statement addressed all Saudi and non-Saudi naval vessels that were part of the maneuvers, suggesting that the IRGC views the ongoing war games as an evident attempt to foment tensions and compromise sustainable security in the Persian Gulf.

Back in August, Iranian Defense Minister Brigadier General Hossein Dehqan said the Islamic Republic’s naval forces were monitoring all movements in the Persian Gulf and would confront any vessels intruding into the country's territorial waters.

Iran has invariably asserted that it only uses its naval might for defensive purposes and to send across the Islamic Republic’s message of peace and security to other nations.

Tags: US IRGC
Short Link rasanews.ir/201mLU
Share
0
Please type in your comments in English.
The comments that contain insults or libel to individuals, ethnicities, or contradictions with the laws of the country and religious teachings will not be disclosed