Rasa - The Pentagon is considering carrying out limited air raids on the Syrian army's military positions, an Arabic-language newspaper reported. 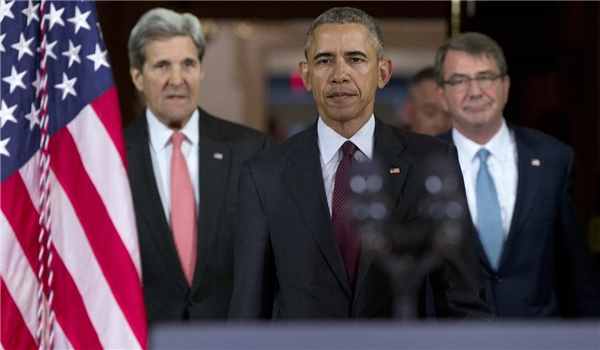 RNA - Asharq al-Awsat newspaper quoted some Pentagon and White House sources as saying that the US airstrikes will not be disclosed and the US will not claim them publicly.

The paper said that some analysts expressed concern over the mounting tension between Russia and the US as it might drift the Syrian war and spur a military conflict.

No official source has confirmed the report.

Earlier this week, the Russia Today quoted a US official as saying that the Obama administration is set to discuss striking positions of the Syrian military without a UN Security Council resolution, while bombing air force runways with missiles fired from coalition planes and ships is being considered.

A US administration official who is to take part in the discussions told the Washington Post that one proposed way "to get around the White House’s objection to striking the Assad regime without a UN Security Council resolution would be to carry out the strikes covertly and without public acknowledgment”, RT reported.

The CIA and the Joint Chiefs of Staff expressed support for “limited military strikes against the Syrian government,” last Wednesday, when the US discussed such “kinetic” options, the official told the Washington Post.

“There’s an increased mood in support of kinetic actions against the regime,” one senior administration official was quoted as saying.

“The CIA and the Joint Staff have said that the fall of Aleppo would undermine America’s counterterrorism goals in Syria,” he added.

After threatening to withdraw from the Syrian peace process for weeks, Washington finally announced the “suspension” of bilateral contact with Moscow concerning the crisis on Monday.

On Monday, Russian President Vladimir Putin suspended Moscow’s participation in a program that disposes of plutonium from decommissioned nuclear warheads, citing “a radical change in the environment, a threat to strategic stability posed by the hostile actions of the US against Russia, and the inability of the US to deliver on the obligation to dispose of excessive weapons plutonium under international treaties.”

Asked if the US had fulfilled its own long-standing obligation to separate militants from terrorists, State Department spokeswoman Elizabeth Trudeau replied, “We believe we did.”

Tags: Pentagon US Syria
Short Link rasanews.ir/201mLR
Share
0
Please type in your comments in English.
The comments that contain insults or libel to individuals, ethnicities, or contradictions with the laws of the country and religious teachings will not be disclosed