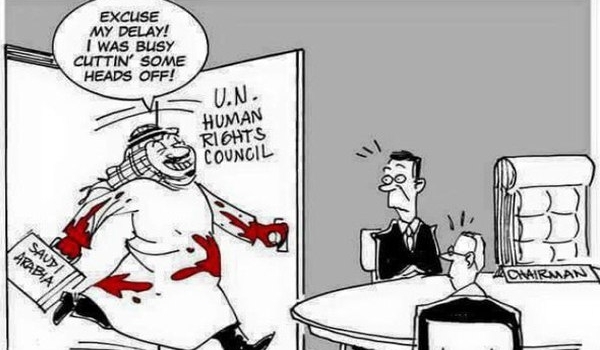 RNA - Their call comes after a year which saw the regime savagely bomb Yemen, commit vast numbers of beheadings and mass execution, and detain activists. It also comes ahead of a critical UN vote this fall on whether Saudi Arabia retains its seat.

Controversy over the matter has increased since the Saudi ambassador was also given a key role on a panel related to the Council. That influential five-strong panel selects applicants from around the world for scores of expert roles in countries where the UN has a mandate on human rights. Riyadh’s re-election on the Council, therefore, means it will once again have influence over international human rights standards.

However, there is no way Saudi Arabia should be on the Human Rights Council. Nothing has changed since the regime was elected last year. On the contrary, the sheer scale of systematic abuses that Saudi Arabia has committed both at home and in Yemen, not to mention its cynical use of its privileged UN role to evade justice, have greatly compromised its integrity to play any international human rights role.

Into the argument, Human Rights Watch and Amnesty International have documented 69 unlawful airstrikes by Saudi Arabia and its coalition, some of which amount to war crimes, killing thousands of civilians and hitting homes, markets, hospitals, schools, civilian businesses, and mosques.

The two organizations have documented numerous attacks involving internationally banned cluster bombs and white phosphorous munitions, including in civilian areas. Saudi Arabia should be suspended from the Human Rights Council until it ends unlawful attacks in Yemen and conducts credible investigations that meet international standards or agrees to and cooperates with an independent international inquiry.

That the regime has strongly resisted all accountability measures until now is not surprising at all. After threatening to withdraw funding from critical UN programs, Saudi Arabia in June compelled the UN secretary-general to remove Riyadh and its coalition from his “List of Shame” for killing and maiming children and attacking schools and hospitals in Yemen.

In 2015, Saudi Arabia used its position on the Human Rights Council, aided by its allies, to obstruct the creation of an independent international investigation into its violations in Yemen. Neither Saudi Arabia nor a pro-Saudi Yemeni commission of inquiry has carried out credible investigations into coalition attacks that have been laws-of-war violations.

Here, countries such as the United States and the European Union have the chance to comply with the minimum standards of the Council by not voting for regimes such as Saudi Arabia. António Guterres, the newly nominated Secretary General, will also have an important role to play by ensuring human rights criteria for those elected into the Council.

The HRC is composed of 47 member states and will hold elections at the end of October for 14 positions. The vote is a golden opportunity for the Western governments to demonstrate they truly value human rights and international law. They will have the chance to show true solidarity to the people of Yemen and hold Saudi Arabia to account for its appalling human rights record and the ongoing war crimes.

It is past time for the General Assembly to be recommitting to accountability, not allowing countries that commit gross and systematic abuses to remain Council members. The General Assembly’s failure to suspend Saudi Arabia and vote against its re-election could seriously harm the Council’s credibility.

Tags: Saudi Human Right
Short Link rasanews.ir/201mLA
Share
0
Please type in your comments in English.
The comments that contain insults or libel to individuals, ethnicities, or contradictions with the laws of the country and religious teachings will not be disclosed