Rasa - Israel has forced out of the occupied territories all but one of a group of female activists recently detained on a boat heading for the besieged Gaza Strip. 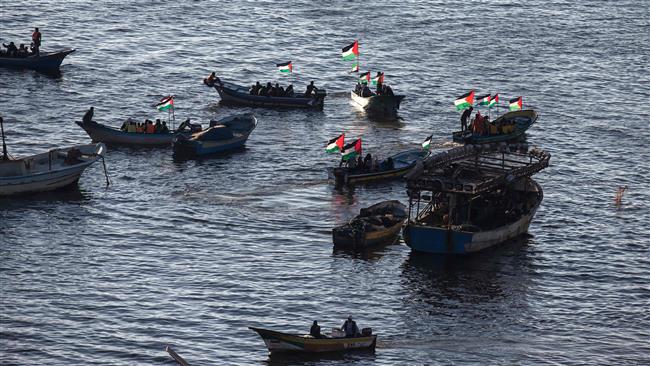 RNA - On October 5, the Israeli navy intercepted Zaytouna (Olive) solidarity boat before arriving in Gaza. The boat was diverted to the Israeli port of Ashdod and thirteen female activists, including Nobel Peace Prize winner Mairead Maguire of Northern Ireland, were arrested.

"All the boat's passengers have left Israel except a woman who will fly to Oslo this afternoon," Sabin Haddad, a spokeswoman for Israel’s interior ministry, said on Friday.

Zaytouna set off from the Spanish port of Barcelona to take humanitarian aid to Gaza in mid-September under the banner, “The Women’s Boat to Gaza.”

The “Women’s Boat” is part of the larger Freedom Flotilla Coalition.

Gaza, with a population of more than 1.8 million, has been under siege by the Israeli regime since June 2007. The blockade has caused a decline in the standards of living as well as unprecedented levels of unemployment and unrelenting poverty.

In 2015, when the “Women’s Boat” attempted to deliver humanitarian aid to Gaza, the Israeli regime’s naval forces boarded the vessel and forced it to change route.

A similar attempt by a Turkish flotilla resulted in the death of 10 activists in 2010, when Israeli commandos attacked the Freedom Flotilla in international waters in the Mediterranean Sea. They also injured about 50 other activists.

Israel has also waged three wars on Gaza since 2008, including the 2014 offensive, which left more than 2,200 Palestinians dead and over 11,100 others wounded.

Israeli forces fired live bullets at Palestinians during clashes in the east of Gaza on Friday, leaving three men injured.

Also on Friday, Israeli naval forces opened fire on a Palestinian fishing boat off the coast of Gaza, and nabbed two fishermen. The Israeli troops seized the boat.

Israel had imposed limits of three nautical miles for fishing in waters off the Gaza shore until August 2014. Under a ceasefire agreement that ended the deadly 50-day Israeli war on Gaza in the same year, Tel Aviv agreed to immediately expand the fishing zone off Gaza’s coast and to allow fishermen to sail as far as six nautical miles off the shore. The agreement also stipulated that Israel should expand the area gradually up to 12 miles.

Palestinian fishermen, however, say the Israeli navy opens fire on them before they reach the agreed limit.

Tags: Israel Gaza
Short Link rasanews.ir/201mL3
Share
0
Please type in your comments in English.
The comments that contain insults or libel to individuals, ethnicities, or contradictions with the laws of the country and religious teachings will not be disclosed