Syrian army forces, backed by fighters from popular defense groups, have carried out a broad military operation against terrorists’ positions in Aleppo, and taken control of a strategic hilltop overlooking militant-held districts in the conflict-plagued northwestern city. 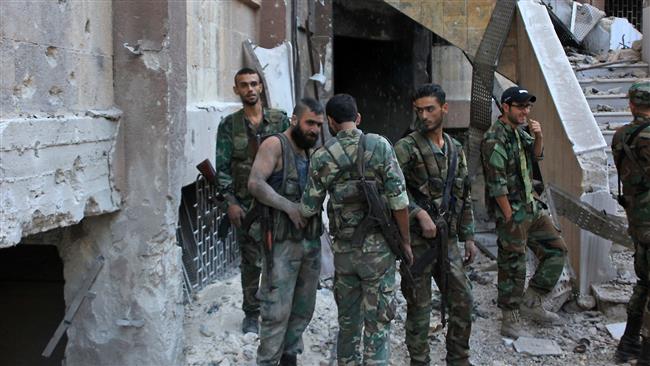 The achievement is the latest in a series of advances the Syrian army has recently made in Aleppo to dislodge militants from the eastern flank of the city, located some 355 kilometers (220 miles) north of the capital, Damascus.

Several vehicles belonging to the so-called Jaish al-Fatah (The Army of Conquest) militant group were also destroyed in Syrian air strikes on al-Zallaqiyat, Soran and Khunayfis villages in the western-central province of Hama.

“I heard his statement concerning only Nusra. For God's sake, if Nusra leaves with weapons toward Idlib, where its main forces are based, we are ready to support this approach for the sake of Aleppo, and will be ready to urge the Syrian government to agree," Lavrov said in an interview with Russia's Channel One television network on Friday.

Militants remaining in Aleppo after the UN special envoy's plan is enacted should be clearly separated from Nusra, the top Russian diplomat pointed out.

In another development on Friday, two people, including a child, lost their lives and two others suffered injuries when terrorists fired ten rockets at al-Midan neighborhood in Aleppo.

A source at Aleppo Police Command said the attack caused material damage to public and private properties in the targeted area as well.

The conflict in Syria, which flared up in March 2011, has claimed the lives of more than 400,000 people, according to an estimate by the UN special envoy for Syria.

Tags: Syria Russia
Short Link rasanews.ir/201mL2
Share
0
Please type in your comments in English.
The comments that contain insults or libel to individuals, ethnicities, or contradictions with the laws of the country and religious teachings will not be disclosed