US Not Able to Confront Iran Militarily

Rasa - Commander of the Islamic Revolution Guards Corps (IRGC) Navy Rear Admiral Ali Fadavi downplayed the US military power to launch war against Iran, stressing that Tehran has even harnessed Washington's power in the sea. 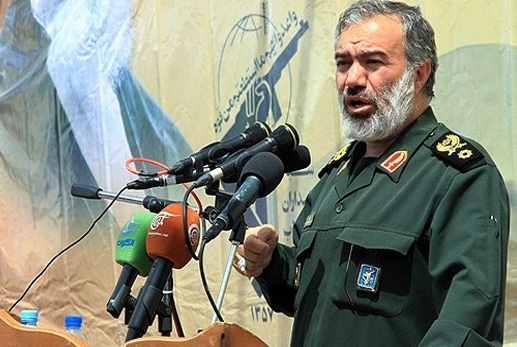 RNA - "The US officials have acknowledged the Iranian armed forces' military power," Admiral Fadavi said on Friday, addressing a ceremony in Tehran.

He reiterated that Iran's deterrent power is the outcome of the resistance of Iranian nation against the enemies.

Admiral Fadavi said that he US doesn’t have the power to confront Iran militarily.

In relevant remarks in May, Rear Admiral Fadavi downplayed the US power, and said no naval force in the world dares to threaten the IRGC Navy and its speedboats.

"We at the IRGC Navy and in the sea give no care to the US power and our speedboats don’t recognize the US aircraft carriers" as a power, Fadavi said, addressing a ceremony in the Southern city of Bandar Abbas.

"No one dares to give a dirty look at Iran let alone launching a war," he added.

Fadavi said the United States doesn't even think of attacking Iran for fear of a huge backlash to its interests.

"Due to the presence of IRGC forces, the Americans do not dare to get near the Iranian borders," Rear Admiral Fadavi said.

Referring to the failed US wars of the past decade, he said, "Washington seeks to weaken and marginalize countries that follow the Iranian Revolution as their role model; however, this is doomed to fail too."

"The US presence in the region causes insecurity and therefore it should leave," Rear Admiral Fadavi added.

Tags: Ali Fadavi IRGC
Short Link rasanews.ir/201mKw
Share
0
Please type in your comments in English.
The comments that contain insults or libel to individuals, ethnicities, or contradictions with the laws of the country and religious teachings will not be disclosed