Rasa - True terror is to wake up one morning and discover that the same powers that created the terrorist groups of Al-Qaeda and ISIL are also the ones that are “fighting” them in Iraq and Syria. 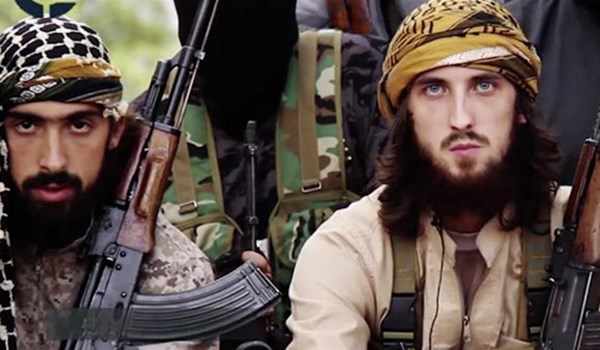 RNA - It is here that Iran's leading military commander in Iraq and Syria Major General Qassem Soleimani says the West is paying a heavy security price for supporting these terrorist groups in the Middle East. He says ISIL and Takfiri terrorist groups were not created for war with Syria alone; they were formed to target Iran, and hence, Iran’s advisory forces are not only defending Syria, but also Iran and the whole Muslim world.

It is a sad reality. The Iranian commander is not alone and the mainstream media can no longer cover up the fact that many American officials have already admitted in public that the US government created both ISIL and Al-Qaeda. The US has never actively fought them, but has instead supported them in the Middle East:

Former Secretary of State and Democratic presidential nominee Hillary Clinton once said without a word of caution or regret: “Let’s remember here… the people we are fighting today we funded them twenty years ago. Let’s go recruit these mujahideen. And great, let them come from Saudi Arabia and other countries, importing their Wahabi brand of Islam...”

Think it through. The global “War on Terror” is led by the United States. But it is not directed against ISIL and Al-Qaeda. Quite the opposite, Clinton says it is the “right thing” to support them and personally threaten President Bashar Assad’s family with death; or that the “best way to help Israel is to destroy Syria” - the historic home of millions of Christians going back to the time of the Apostle Paul.

To this end, the bogus “War on Terror” campaign uses these terrorist operatives as America’s foot soldiers. The imposition of an “American Caliphate” (modelled on Saudi Arabia) is an integral part of this foreign policy, a means to destabilizing sovereign countries and imposing regime change.

That says why Clinton’s successor at the State Department, John Kerry is in direct liaison with “moderate” rebels and Al-Nusra Front, an Al-Qaeda affiliated organization in Syria, integrated by ISIL and other terror groups and funded by the US and allies. Mind you, Kerry had a meeting with their leaders in September on the sidelines of United Nations General Assembly in New York!

As is, the US government purposely created the terrorist groups that justify its bogus “War On Terror” and military interventions in the heartlands of the Muslim world. The nefarious agenda is to foment perpetual war, not in the name of global safety and security, but in the name of helping Israel.

It’s an indication of Washington’s murderous and psychopathic nature. It proves - as if any more proof was needed - that the US government sponsors terrorism, all in order to protect Israel, divide and rule, trigger arms race, contain Iran, defend US hegemony with nuclear weapons, and manipulate regional governments to the enrichment and empowerment of Official Washington. Tragic enough, the world’s public is too brainwashed by lies to do anything about it, and Washington’s vassals in Europe have to pretend that this policy of state terrorism is bringing freedom and democracy.

We end this write-up with a fine document leaked by the Western media. The DIA (Defense Intelligence Agency) is 1 of 16 US military intelligence agencies. The DIA wrote on August 12, 2012: “There is the possibility of establishing a declared or undeclared Salafist Principality in eastern Syria, and this is exactly what the supporting powers to the opposition want, in order to isolate the Syrian regime…”

This was all written before ISIL came on to the world stage. Clearly ISIL was no random Syrian uprising, but a carefully groomed and orchestrated controlled opposition group. And the “supporting powers to the opposition” referred to are Saudi Arabia, Qatar, Turkey and the mere extras, who are in turn being supported by Washington and Tel Aviv to overthrow the Syrian government. It’s yet another key giveaway as to why this ridiculous, dangerous and vaudevillian terrorist group never attacks Israel.

What’s clear, however, is that ISIL and its monstrosities won’t be defeated by the same powers that brought it to Iraq and Syria. ISIL is a US-Israeli creation, a truth as black and white as the colours on their flag.

Tags: US Iran ISIL Iraq Al-Qaeda
Short Link rasanews.ir/201mKq
Share
0
Please type in your comments in English.
The comments that contain insults or libel to individuals, ethnicities, or contradictions with the laws of the country and religious teachings will not be disclosed