Rasa - The commander of Iraq's Popular Mobilization Forces, Hadi al-Ameri, vowed tough war against the Turkish army's military incursion in Iraq, warning that his forces will confront any Turkish aggressor the same way they stand against the ISIL. 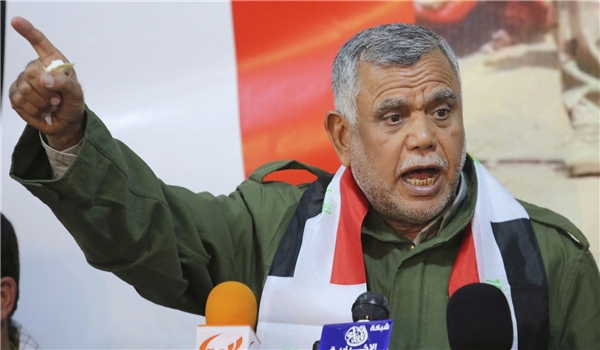 RNA - "The Iraqi forces will treat any foreign troops who interferes in Mosul operations exactly as ISIL terrorists; Mosul should only be liberated by the Iraqi forces," al-Ameri said on Wednesday.

On Tuesday, the Iraqi volunteer forces vowed to confront the presence of the Turkish army troops in Iraq.

He reiterated that the Iraqi volunteer forces will not tolerate the presence of the Turkish troops in Iraq.

Ankara, in December 2015, first deployed about 150 soldiers equipped with heavy weapons and backed by two dozen tanks to Bashiqa, located on the outskirts of Mosul. It claimed the deployment was part of a mission to train and equip Iraqi Kurdish Peshmerga forces in the fight against ISIL. Baghdad rejected the claim, saying it did not need the Turkish military assistance in the fight.

On Saturday, Turkish lawmakers almost overwhelmingly approved the extension by another year of Ankara’s cross-border military incursions into Syria and Iraq. During the parliamentary session, Erdogan urged allowing his country’s troops to participate in the upcoming battle for Mosul, warning Baghdad and Turkey’s Western allies that Turkey must be involved in any operation and included in the decision-making process.

“Turkey cannot be left off the table. The others don’t have such a border with Iraq. They may want us to stay as spectators but that decision is also going to be made here,” the Turkish president said.

Tags: Hadi Al-Ameri Turkey ISIL
Short Link rasanews.ir/201mKR
Share
0
Please type in your comments in English.
The comments that contain insults or libel to individuals, ethnicities, or contradictions with the laws of the country and religious teachings will not be disclosed