US, UK protecting Saudi Arabia in its war on Yemen: Analyst

Rasa - Israeli airstrikes and tank shells have pounded the besieged Gaza Strip after an alleged rocket attack from the Palestinian coastal sliver targeted the occupied territories. 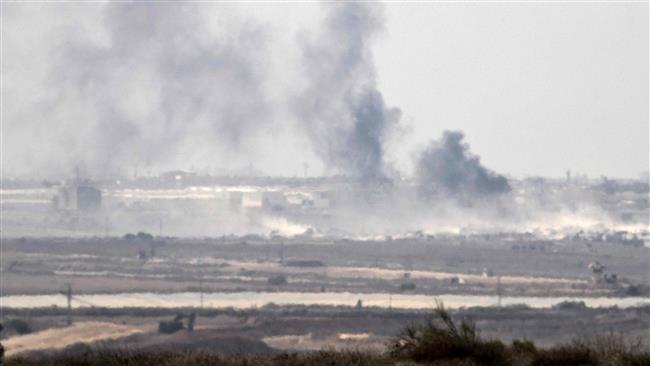 RNA - The tank shelling hit an observation post belonging to the Palestinian resistance movement, Hamas, near the northern city of Beit Hanun on Wednesday, with local residents and Hamas-run media saying that no one sustained injuries in the attack.

Hamas security sources said the post, which came under the Israeli shelling, was run by the movement’s military wing, the Ezzedine al-Qassam Brigades.

According to Hamas security officials, Israeli jets also carried out two strikes in eastern Gaza Strip, while two other air raids hit the southern city of Khan Yunis and the al-Tufah neighborhood of Gaza City in the coastal enclave’s north.

The developments came hours after the Israeli military claimed a rocket had hit a street of Sderot in the occupied territories.

Israeli police spokesman, Micky Rosenfeld, said on Twitter that the incident caused some damage, but no injuries were reported.

Back in August, Tel Aviv targeted Gaza with dozens of airstrikes and tank shelling after a rocket allegedly hit Sderot.

Israel has waged three wars on Gaza since 2008, including the 2014 offensive, which left more than 2,200 Palestinians dead and over 11,100 others injured.

Israel continues to carry out attacks on the Palestinian coastal sliver from time to time.

Gaza has been under an Israeli siege since June 2007. The blockade has caused a decline in the standard of living as well as unprecedented levels of unemployment and unrelenting poverty in the Palestinian coastal enclave.

Tags: Israel Palestine
Short Link rasanews.ir/201mKM
Share
0
Please type in your comments in English.
The comments that contain insults or libel to individuals, ethnicities, or contradictions with the laws of the country and religious teachings will not be disclosed