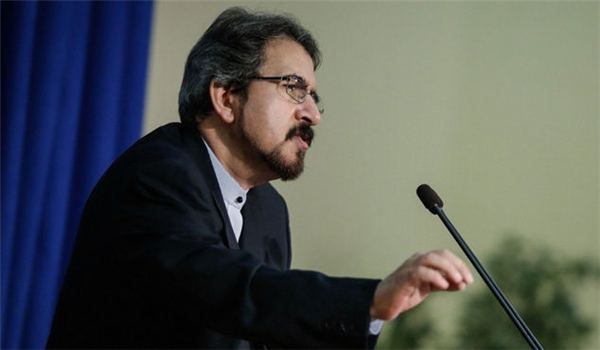 RNA - "Such reports have fundamental problems principally and in nature and therefore, are invalid in the Islamic Republic of Iran's view," Foreign Ministry Spokesman Bahram Qassemi said on Wednesday.

Noting that the most important and serious fundamental problem of the report is that it has been devised based on a cruel, unfair and politically-tainted resolution to pressure Iran and meet certain countries' political interests, he underlined that such a report lacks the necessary validity and value.

Qassemi also said that using unknown and unreliable sources in drafting the report is another reason for its invalidity.

The UN human rights report on Iran was issued as Washington and its regional allies have been directly and indirectly killing thousands of civilians and supporting the terrorists in different parts of the world in the past few years.

"The US has directly killed many civilians in Iraq and Afghanistan and has destroyed their infrastructural facilities; recently in Syria's Deir Ezzur region, they have bombed the Syrian army forces and helped the terrorists this way. On the other hand, the US has equipped Saudi Arabia with different weapons which are unconventional in quantity and quality to be used in attacks against the innocent Yemeni people," Iran's Judiciary Chief Ayatollah Sadeq Amoli Larijani said, addressing Judiciary officials in Tehran late last month.

In relevant remarks in June, Deputy Head of Iran's Human Rights Headquarters for International Affairs Kazzem Qaribabadi announced that Tehran plans to display the numerous cases of Washington's severe violations of human rights in the US and in other world states.

"There are numerous instances of human rights violations in the US, but there are a few freedom-seeking countries in the world which state these cases in a straightforward manner and the Islamic Republic of Iran is an independent country which will study this case," Qaribabadi said.

He referred to the instances of human rights violations by Washington inside the US, and said while the blacks constitute a rather smaller part of the US population, most of the prisoners in the country are blacks and every 36 hours, a black citizen is killed by the US police.

Qaribabadi also underlined the US violations of human rights in other countries, and said Washington's war on Iraq, Afghanistan and Libya, its support for the dictatorial regimes and coups and imposing sanctions against other countries, including Iran, which has left irreparable impacts on ordinary people's lives are instances of the US violation of human rights outside the country.

He also said that Iran prepared a 130-page book on the US violation of human rights in 2015.

Tags: Iran UN Human rights
Short Link rasanews.ir/201mKG
Share
0
Please type in your comments in English.
The comments that contain insults or libel to individuals, ethnicities, or contradictions with the laws of the country and religious teachings will not be disclosed