Many, including US officials, tried to ruin Syria truce deal: Russia

Rasa - Russian Foreign Minister Sergei Lavrov says a recent breakdown in the Washington-Moscow agreement on a ceasefire in Syria should be blamed on those who favored a military solution to the conflict in the Arab country, among them US officials. 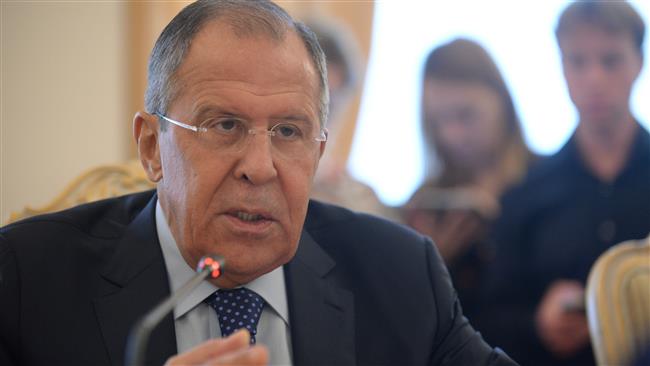 RNA - Lavrov made the remarks in a meeting with Saad Hariri, the former Lebanese prime minister and leader of the al-Mustaqbal Movement (Future Movement), in Moscow on Tuesday.

He expressed regret that “from the very begging there have been many of those, including in the US administration, seeking to break down these agreements,” adding, "And it is still more regrettable that those, who are against political settlement of the Syrian crisis, [and] against the implementation of the relevant resolutions of the United Nations Security Council, and who are openly seeking to employ a force scenario ultimately managed to do that yesterday.”

On September 9, Russia and the US agreed on a milestone deal on the Syria crisis after marathon talks in the Swiss city of Geneva.

Among the initial aims of the truce, which went into effect on September 12, were allowing humanitarian access and joint Moscow-Washington attacks against militant groups, which are not covered by the agreement, including Daesh and Jabhat Fateh al-Sham.

However, the ceasefire came to an end on September 19 after one week following Damascus’ refusal to extend the deal after deadly US-led air raids on its military base near the eastern city of Dayr al-Zawr in violation of the agreement.

On Monday, US State Department spokesman, John Kirby, announced that Washington was suspending its participation in bilateral channels with Moscow that were established to maintain the truce in Syria.

Elsewhere in his comments, Lavrov underlined his country’s determination to continue efforts to settle the Syria crisis through the International Syria Support Group (ISSG) and the UN Security Council.

"We do not shy away from our responsibilities, but we believe that only collectively, only together - including with the US and Europe and with all the key countries in the region - can this crisis be resolved," Lavrov said, adding that any unilateral attempts in Syria could pave the way for a “forceful scenario” in the war-torn country.

Moreover, the top Russian diplomat accused the US of having been unable to fulfill its obligations on Syria, including unblocking Castello road in the divided city of Aleppo and separating terrorists from the so-called moderate opposition.

Moscow and Washington support opposing sides in the conflict.

On Monday, Lavrov voiced concern over the situation in Syria, stressing that Russia is working to remove "obstacles standing in the way" of normalization of the situation in the embattled country.

He made the remarks at a joint press conference with his Cambodian counterpart, Prak Sokhon.

The Russian foreign minister admitted that the Moscow-Washington agreement was "hanging in the air" because of "ambiguity" over the US position in Syria.

Tags: Lavrov US Syria Russia
Short Link rasanews.ir/201mJz
Share
0
Please type in your comments in English.
The comments that contain insults or libel to individuals, ethnicities, or contradictions with the laws of the country and religious teachings will not be disclosed