US Plans to Intensify War in Syria in Coming Months

Rasa - The differences between the US and Russia have complicated the situation in Syria, while Washington is expected to intensify the ongoing war in the Arab country, a Lebanese newspaper wrote. 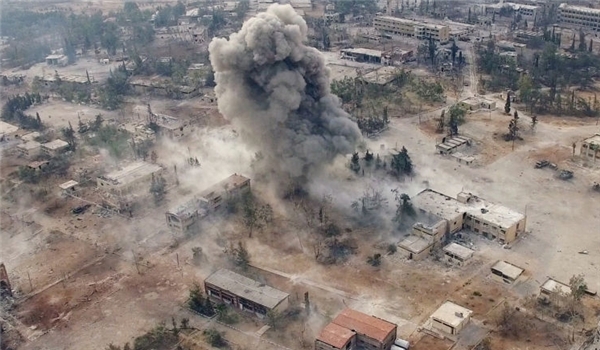 RNA - According to al-Akhbar daily, the failure of the ceasefire and the current crisis between the US and Russia is a warning for the further exacerbation of the situation in Syria.

The US administration needs a field victory to maintain its internal credibility until the formation of the new government, but Damascus and its allies don’t intend to surrender.

But Washington has enough time to play all its cards and it needs no withdrawal as the war is not threatening its borders and failure of solutions to the war poses no risk to Washington, while the other side has no other option but to win the war.

The US winning card for obtaining its objectives in Syria is the militant groups to pressure Bashar Assad to surrender. Now the question is if the US will ask the terrorist groups to attempt to intensify war in Syria?

It is not unlikely for Washington to use this option given the internal differences in the White House and its willingness to use the militants' victory as a means of propaganda for political gains.

Meantime, army sources in Syria say the US pounded several strategic bridges in Deir Ezzur in the last few days to prevent the army and its allies' further advances in the fight against the ISIL terrorists.

"The US aimed to extend the geographical area of its influence by bombing the strategic bridges in Deir Ezzur and stop the Syrian army's advance in the war against the ISIL," the source told FNA.

"Washington also sought to cut the supply routes between the provinces and separate Deir Ezzur's countryside from the city of Deir Ezzur through the bombing," the source added.

"Destruction of Deir Ezzur bridges was also aimed at dividing the regions under the US and Russian influence in the Eastern and Western parts of the Euphrates," the source said.

The US-led coalition fighter jets once again conducted air raids over Deir Ezzur province on Friday, destroying two other key bridges over the Euphrates River, just three days after demolishing two other strategic bridges in similar airstrikes in the same region near the border with Iraq.

According to reports, the Coalition’s airstrikes resulted in the destruction of al-Shihan Bridge near al-Salhin neighborhood in al-Bokamal countryside and Tarif Bridge in the Western countryside that extends between Deir Ezzur and Raqqa provinces.

The US-led coalition warplanes had also destroyed al-Asharah Bridge that links the two banks of the river in the Eastern part of the Deir Ezzur province on Wednesday, only few hours after demolishing al-Mayadin Bridge.

The bombers had also targeted the Syrian army troops near the city of Deir Ezzur on September 17, leaving over 90 military personnel dead and a hundred wounded.

Tags: US Syria
Short Link rasanews.ir/201mJR
Share
0
Please type in your comments in English.
The comments that contain insults or libel to individuals, ethnicities, or contradictions with the laws of the country and religious teachings will not be disclosed