Rasa - Saudi warplanes have carried out a series of fresh airstrikes against residential areas across Yemen, leaving a number of people dead and causing more material damage in the impoverished Arab country. 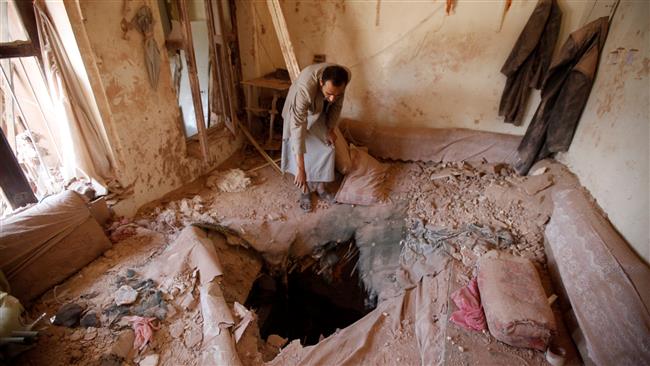 RNA - Two fishermen lost their lives and more than 10 others suffered injuries on Sunday morning, when Saudi fighter jets struck an area in the Red City of Mokha, situated 346 kilometers south of the capital, Sana'a, Arabic-language al-Masirah television network reported.

Saudi military aircraft also bombarded an area in the city of Sirwah, which lies about 120 kilometers east of the capital, as well as Nihm district in the capital province of Sana’a, but there were no immediate reports on possible casualties and extent of damage.

The developments came a day after two people were killed and five others injured in a Saudi aerial attack against a district in Sana’a.

Yemen has been under Saudi military strikes since late March 2015. The war was launched in a bid to reinstate Hadi, who has stepped down as Yemen’s president but is now seeking to grab power by force.

The United Nations puts the death toll from the military aggression at about 10,000.

Yemeni army forces together with fighters from the allied Popular Committees are fighting back the Saudi invaders and occasionally launch retaliatory attacks on the kingdom’s soil.

Tags: Yemen Saudi
Short Link rasanews.ir/201mJF
Share
0
Please type in your comments in English.
The comments that contain insults or libel to individuals, ethnicities, or contradictions with the laws of the country and religious teachings will not be disclosed