FM: No Foreign Country Can Set Condition for Talks with Iran

Rasa - Iranian Foreign Minister Mohammad Javad Zarif underlined that no foreign state can set conditions for negotiations with Iran because Iran is an independent country. 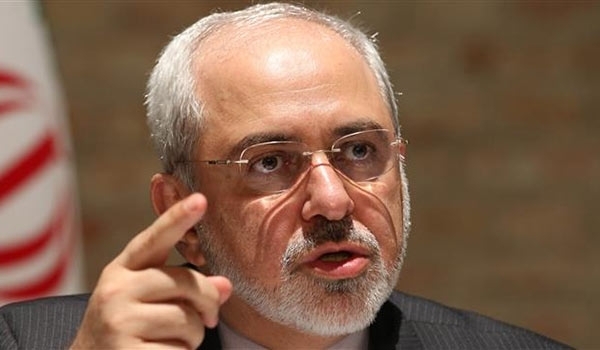 "Our policies are specific and different countries' representatives come to Iran while knowing about Iran's constructive policies," the Iranian foreign minister told reporters on Saturday.

In relevant remarks earlier on Saturday, Iranian Foreign Ministry Spokesman Bahram Qassemi said that Tehran will not accept any preconditions for the expansion of relations with Berlin.

"As we have reiterated on different occasions, Iran-Germany relations are based on mutual respect and no precondition is acceptable in this relations," Qassemi said in reaction to Gabriel's statements.

"We also reject any interference of a third party in this regard and consider it as an impediment to improvement of the two countries' relations," the Iranian foreign ministry spokesman added.

He, meantime, pointed to Gabriel's statements on the issue of Palestine, and said, "The Islamic Republic of Iran considers defending the rights of the Palestinian nation as inseparable part of its foreign policy and will not relinquish supporting the Palestinian ideals under any conditions."

Qassemi said that Gabriel's remarks on human rights conditions in Iran are irrelevant, and said, "The Islamic Republic of Iran does not allow any country to interfere in its internal affairs."

The Iranian foreign ministry spokesman underlined that under the conditions that international terrorism is threatening interests of all countries, it is expected that the world countries, specially those which have been and are the victims of terrorism to prioritize serious and relentless fight against extremist thoughts and the circles nurturing terrorists.

Asked about the prospects of Iran-Germany relations, Qassemi said that the Islamic Republic of Iran and the Federal Republic of Germany have great potentials in terms of bilateral ties in all fields and the German officials for realization of cooperation should carefully consider this point that the two countries' relations have always had and has cynics who never stop ruining the growing trend of Tehran-Berlin relations.

"Hence, we recommend them to make their statements with more care and attention to what they utter," he added.

Tags: Der Spiegel negotiations Zarif German
Short Link rasanews.ir/201mJ0
Share
0
Please type in your comments in English.
The comments that contain insults or libel to individuals, ethnicities, or contradictions with the laws of the country and religious teachings will not be disclosed