Rasa - Israeli military aircraft have carried out three air strikes against areas in the Gaza Strip in yet another act of aggression across the region. 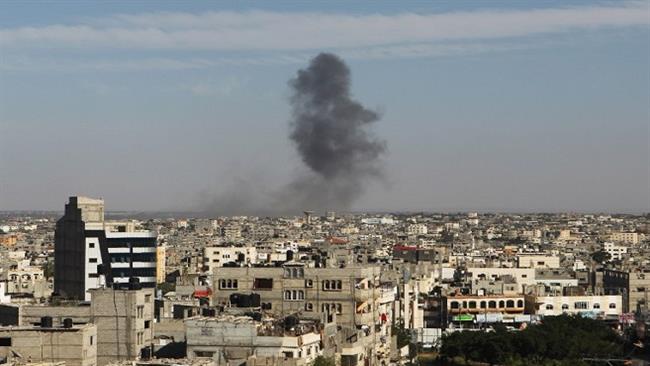 There were no immediate reports about the possible casualties.

The airstrikes came hours after Tel Aviv claimed that a mortar shell fired from the coastal enclave had hit an open terrain in the Eshkol regional council. The projectile reportedly did not cause any damage.

The Israeli military frequently bombs the Gaza Strip. The disproportionate force is always used in violation of international law, and civilians are often killed or injured.

The regime has added Syria to its regular aerial targets, attacking the Golan Heights where the Syrian army battles Takfiri terrorists.

On Tuesday, Israeli warplanes targeted Syrian government artillery positions, claiming that mortar shells had been launched from the Golan Heights into the occupied Palestinian territories.

The Syrian army said this week it had shot down an Israeli warplane and a drone following an Israeli attack on an army positions in the country's south.

Lebanon is another target of Israeli aerial incursions, with warplanes carrying out overflights in the Arab country's airspace from time to time.

Gaza is still reeling from Israeli invasions - the last launched in 2014 in which nearly 2,200 Palestinians were killed.

The coastal enclave of 1.8 million has been under an Israeli siege since June 2007, where the living standards have sharply declined amid unprecedented levels of unemployment and poverty.

Tags: Israel Palestine
Short Link rasanews.ir/201mBU
Share
0
Please type in your comments in English.
The comments that contain insults or libel to individuals, ethnicities, or contradictions with the laws of the country and religious teachings will not be disclosed