Rasa - A prominent US human rights organization has organized an event in Washington DC to protest the sale of American weapons to Saudi Arabia. 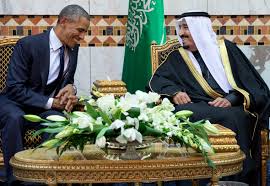 RNA - Activists from CODE PINK, a peace and social justice movement working to end US-funded wars, condemned the killing of civilians by Saudi Arabia, and expressed solidarity with the Yemeni people.

The protesters painted their hands with red paint to symbolize Washington’s complicity in the killing of innocent Yemeni civilians.

The CODE PINK activists also called on American lawmakers to stop spending their tax dollars on supporting the Saudi kingdom.

Arms sales by Western governments to Saudi Arabia have come under scrutiny by several rights groups due to Riyadh’s bombing campaign in Yemen.

The administration of US President Barack Obama has offered Saudi Arabia $115 billion in arms sales, a report seen by Reuters has found.

The offer, including weapons, other military equipment and training, is the highest the United States has offered in its 71-year alliance with the monarchy, the agency reported Wednesday.

Authored by William Hartung of the US-based Center for International Policy, the report said the offers were made in 42 separate deals and most of what they consist are yet to be delivered.

According to Reuters, “US arms offers to Saudi Arabia since Obama took office in January 2009 have included everything from small arms and ammunition to tanks, attack helicopters, air-to-ground missiles, missile defense ships, and warships. Washington also provides maintenance and training to Saudi security forces.”

Western sales of weapons to Saudi Arabia and other Arab monarchies in the Persian Gulf have faced strict scrutiny since Riyadh began bombing Yemen in March 2015, killing thousands of civilians.

According to the Control Arms Coalition, a group that is campaigning against arms sales, Britain, France and the US are violating the 2014 Arms Trade Treaty (ATT) by exporting conventional weapons to a country engaged in war crimes.

Saudi Arabia was the world’s largest arms importer in 2015, purchasing 9.3 billion in military equipment, according to IHS, a consulting company in Englewood, Colorado.

The US remained the top weapons exporter last year, providing nearly $23 billion in goods and equipment, of which $8.8 billion went to the Middle East, IHS said in its Global Defence Trade Report published in June.

Tags: Arm Sale US Saudi
Short Link rasanews.ir/201m7w
Share
0
Please type in your comments in English.
The comments that contain insults or libel to individuals, ethnicities, or contradictions with the laws of the country and religious teachings will not be disclosed